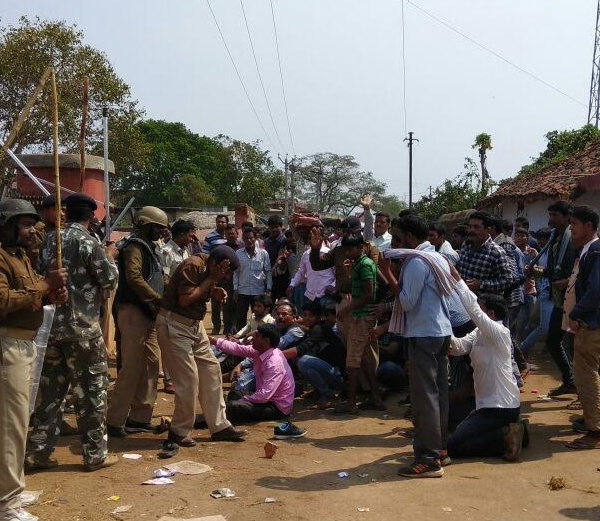 Picture shows the battle between the Adani Power Plant protesters and the police in Godda on March 5,2017.

Godda turned tense today when a group of people protested against the proposed 1,600MW coal-based thermal power plant."Now,the scene is turning normal",said the police.The incident took place near Motia High school located under Muffacil Police station in Godda where the protest followed by the police lathicharge and stone pelting by villagers caused violence.Result?Atleast 2 cops and 10 villagers were injured.

In fact,the Adani group has decided to set up its plant in Godda.The Adani group said they had zeroed in on Pathargama block in Godda. They aim to get water for the plant from Chir river.The company needs to pay between Rs 25 lakh and Rs 30 lakh an acre to villagers who give up land for the project according to new land rates, a highly placed government source added.

However,the protest against the proposed plant turned violent on Sunday when a meeting under the banner of "People's Court for Environment was held a woman threw a chair on policemen.Soon,the meeting was with people running helter-skelter.The police used force and lathi charged."This was protested against by the people who threw stones on the police personnel",said a villager.

In all,two cops and 10 villagers were injured in the incident.