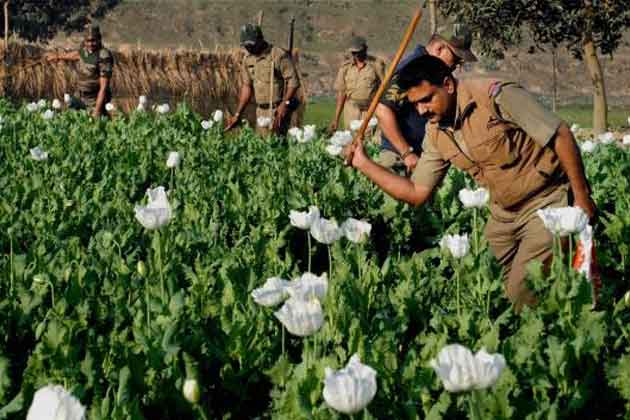 After Punjab,it is Jharkhand where illegal cultivation of opium has taken an upward turn.This became clear after a dozen of illegal opium fileds were burnt by the police in tribal dominated areas of Khunti,Hazaribagh,Chatra and Koderma during the past two years.Now,the SP in Lohardaga,Kartik.S visited the illegal opium fields in Kudu areas and found acres of land were blooming with opium plants and flowers.

Investigations revealed that cultivation has gained momentum due to high rate at which opium was sold in the black market.Though it is not known,whether a gang was behind the crime,the police suspect that many farmers were making huge money by growing and selling opium in tribal dominated areas in Jharkhand.Lohardaga SP is learnt to have carried a campaign and destroyed opium cultivation in a acre of land at Katrak Fagatoli falling under Kudu block of Lohardaga district.

"Already Rs 10 lakh opium was already sold from this illegal farm",said the SP."The most serious point of concern is that the young tribals were getting addicted to opium",said another police officer.  ..