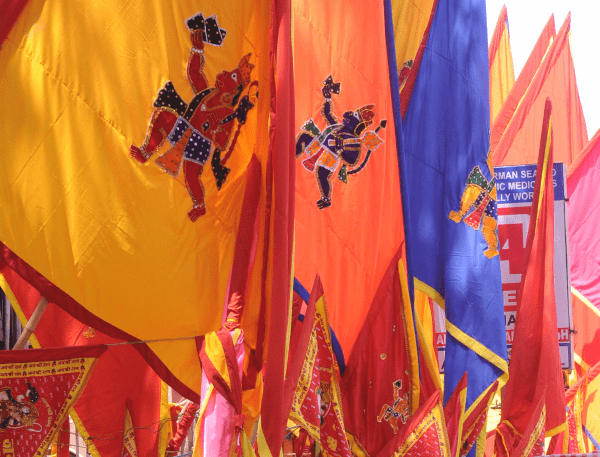 The Ram Navami festival is being celebrated with devotion in Jharkhand on Wednesday amid tight security.

Ram Navami is the ninth day Chaitra Navratri - the nine days being dedicated to nine forms of Goddess Shakti. Though this festival is associated with Lord Ram,people,especially Hindus worship Lord Hanuman.

As per the traditional belief,Lord Hanuman  was born at Aanjan village, 20 kms away from Gumla town in Jharkhand.Aanja is surrounded by thick forest and hills. It is an old religious place. Here in the den of the hill top, Mata Anjani had given birth to Lord Hanuman,it is believed by tribals.”Which is why the people in this tribal inhabited state celebrate Ram Navami by worshiping Lord Hanuman”,said Gurunam Kumar,a sociologist.

In any case,long queues of devotees and Tableaus,each showing the scenes of Ramayan were shown. The Ram temple at Niwaranpur in Ranchi saw more than one lakh devotees praying to Lord Rama and Hanumana.

Ranchi city has been decked up with saffron flags,each depicting Lord Hanuman.No where Lord Ram was visible.

The authorities are extra cautious this time as the festival falls on Friday, the day of public prayers for Muslims.CCTV cameras and drones are being used to keep a close watch on Ram Navmi processions in Ranchi and other districts of the state.

In communally sensitive areas, peace committee meetings have taken place. In steel city Jamshedpur, security forces took out a flag march on Thursday to reassure people that law and order was being maintained.

Processions -- in which people use vehicles and carry tall flags create -- create their own safety problems, such as the risk of getting electrocuted by electric poles and wires.