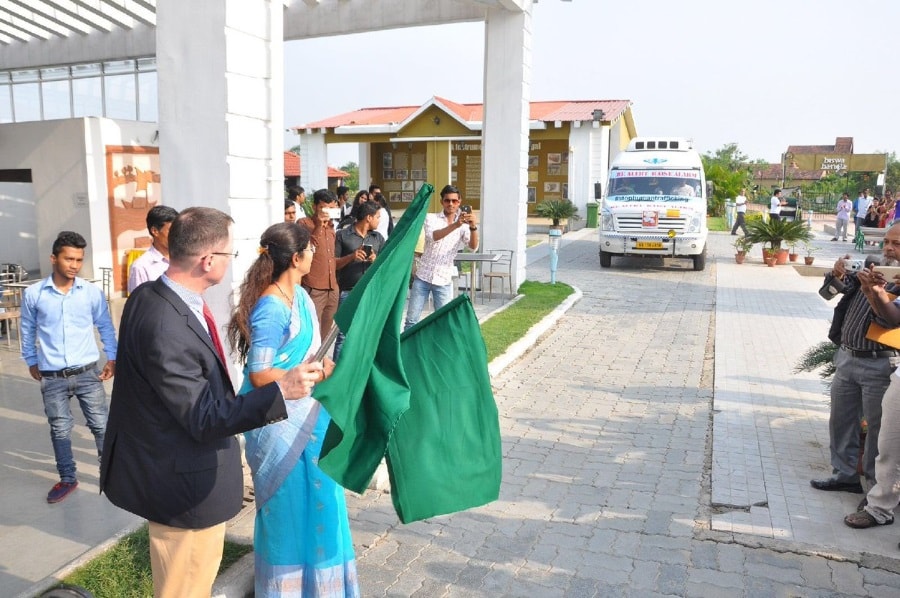 The program started with cultural performance of the members of NGO Asha.

The program came to an end after a superb theater performance by theater group ‘Exposure’ on anti-human trafficking awareness in the rural areas.

An anti-human trafficking caravan started from Kolkata on March 17 and is covering 70 locations across 5 districts in West Bengal, 6 districts in Jharkhand and 8 districts in Bihar.

Locations where the anti-TIP caravan will travel in Jharkhand besides Ranchi are Lohardaga, Gumla, Simdega, Khunti and West Singbhum.(Detailed locations given below)

The campaign is organized in Jharkhand in partnership with the Department of Women and Child Development and Social Welfare, Government of Jharkhand, Jharkhand Police and NGOs.

The program is funded by the U.S. Government.

Interactive street plays, videos on human trafficking and survivor stories by NGOs Sanlaap, Kolkata Sanved and other organisations will be showcased during the campaign. The caravan will also carry a travelling exhibition on ramifications of trafficking, ploys used by the traffickers and protection mechanisms to build awareness.

Members of Child Protection Societies at Block and Village Level and Panchayat representatives will also be mobilised to participate.

The campaign has taken an initiative to encourage youth led action and partnership to combat human trafficking, under which Anti Human Trafficking (AHT) clubs are being formed. Students will be encouraged to form AHT Clubs in their schools and colleges which will regularly build awareness and keep a vigil against trafficking.

Youth will be encouraged to join the Facebook Community I Fight TIP/ tweet @ifightTIP and participate in contests Doodle on TIP and Sketch AHT Action which will be held from 8th March to 30th April,2017.

Learning from the awareness initiative will be shared at the TIP Conclave at Patna organized by the U.S. Consulate Kolkata in partnership with New Delhi-based NGO Shakti Vahini and Banglanatak dot
com in May 11-13, 2017.