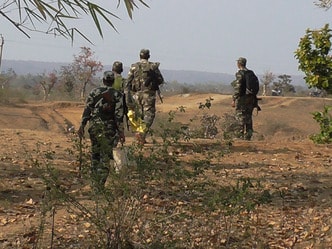 Bura Pahar located along the border of Chattisgarh and Jharkhand has been encircled by the security forces.The aim was to trap the Maoists who were suspected to have launched Sukma attack killing 25 CRPF jawans on Monday.

It is learnt that Jharkhand police together with CRPF have already moved inside Bura Pahar area covering borders of two districts in Jharkhand-Latehar and Garhwa - and Chattisgarh.Bura Pahar has been the hotbed of the Maoists and many incidents of encounters between them and security forces have taken place there.

After the  Maoist ambush of a CRPF team in the Chhattisgarh,operatrion is learnt to be underway in the Bura Pahar area.”The entire area falling in these two states were gheraoed by security forces”,said a senior police officer.

As it is,if Sukma has been the worst Maoist violence district in south Bastar area in Chattisgarh,Bura Pahar,located in dense forest area in Jharkhand,has reported several Naxal Attacks in the past.