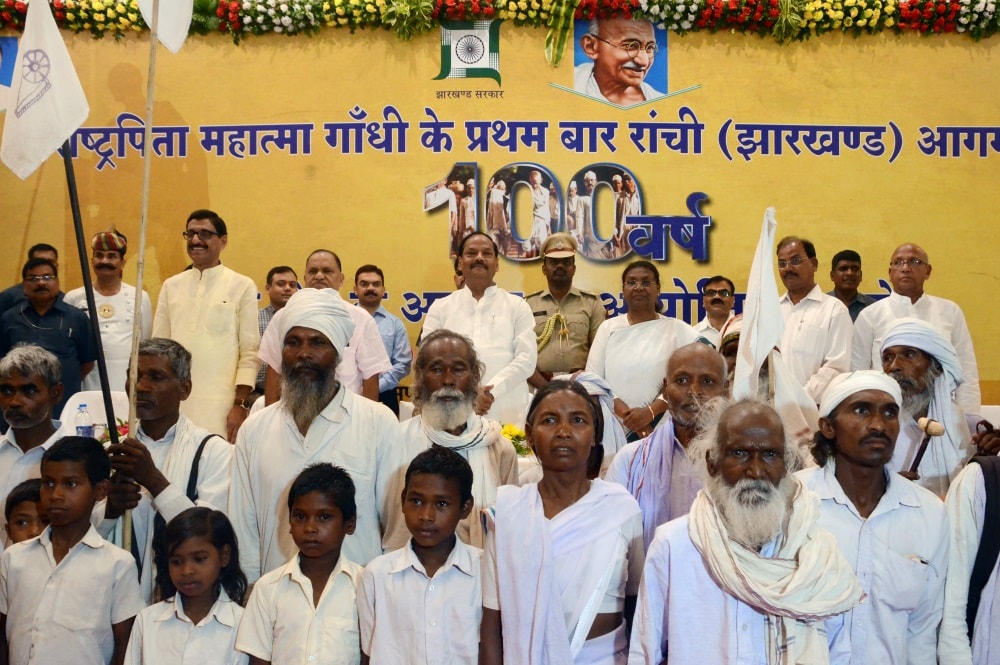 *Picture shows top functionaries including Governor Draupadi Murmu and Chief Minister Raghubar Das with Tana Bhagats-men,women and children who stood in white dress inside Audrey House in Ranchi on June 4,2017

Father of the nation had landed in Ranchi a century ago.After the World War I, Mahatma Gandhi had visited this city for the first time on June 4,1917 to mobilise people for mass movement against the British Rule.

At Ranchi,he was welcomed and greeted by a number of people.Subsequently,a section of the Oraon Adivasis had become vegetarian and participated in Independence movement led by Mahatma Gandhi.They were known as Tana Bhagats.

These Tana Bhagats participated in the Independence movement led by the Congress party and continued to wear white khadi dress,eat vegetarian diet and regard Mahatama Gandhi as their 'God'.

As it is,Audrey House was built in 1854 by Captain Hannyington — the deputy commissioner of Chotanagpur between 1850 and 1856 — the two-storey edifice functioned as an extension of the governor’s secretariat. In the not-so-distant past, when Ranchi was the summer capital of undivided Bihar, it served as the state secretariat.

Raj Bhavan came into existence much later.For years, Audrey House continued to remain vacant except for a small portion that housed the law commission’s office and a couple of other government departments.Subsequently,it was re structured and re built by the Jharkhand Government and President of India Pranav Mukherjee inaugurated as Art and Culture Centre.

Now,the state government led by Chief Minister Raghubar Das is expected to accept the advise of the Governor Draupadi Murmu and re name it as Mahatma Gandhi Art and Culture Centre.