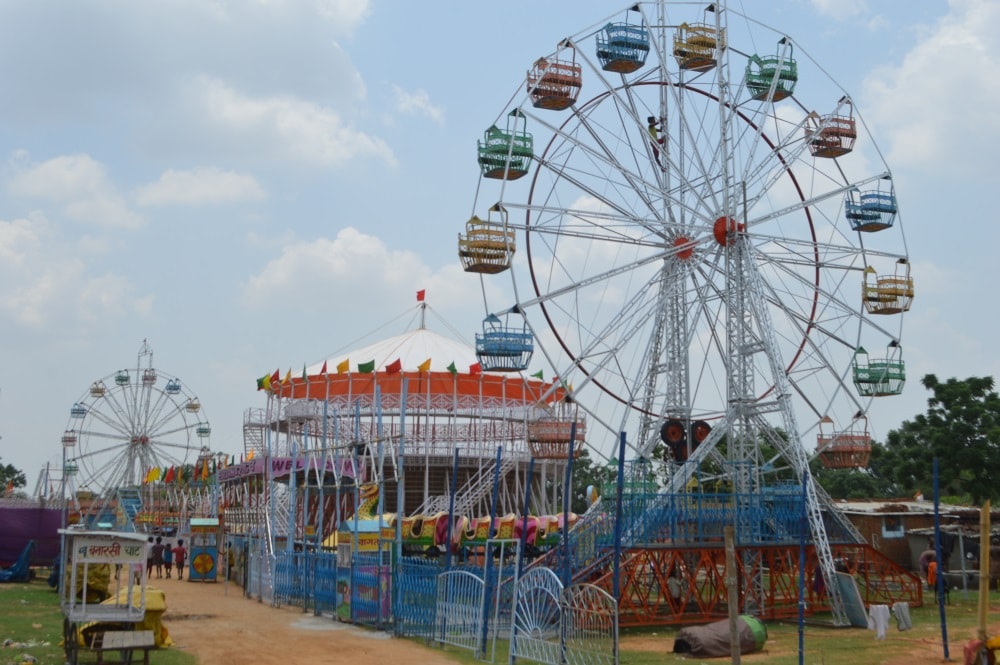 *Photo showing a giant Ferris wheel at the 'mela'

Drizzle and devotees of Lord Jagannath seem to go hand in hand.Like previous year,this year too,undeterred by clouds and drizzle, scores of devotees and  are gearing up to pull the decorated chariots of Lord Jagannath, his brother Balabhadra and sister Subhadra during Rath Yatra celebrations at Dhurva,Ranchi on Sunday.

The annual journey of the deities to 'Mausibadi' - their maternal aunt's house situated a km away was the main attraction of the 10-day festival which began on last Thursday.

Even with clouds and drizzles around the city, a sea of devotees have descended at the main Jagannath temple to participate in the rituals. The absence of ministers, MLAs, and other big wigs from the political circles made it easy for people to offer their prayers

Alongside,tea shops,hand cooked food,handicrafts and giant wheel have come up near the Jagannath temple in Dhurva,Ranchi.Each was a popular site for devotees and their family members

Record shows that the Jagannath temple was established in Dhurva,Ranchi in 1961.The first such Rath Yatra took place a year later in 1692.

Braj Bhushan Nath Mishra, a priest, said all arrangements for welcoming the deities and performing rituals during their nine-day stay have been made at 'Mausibadi'. Before the yatra began, priests organized 'Mangal Aarti', chanted shlokas, and performed a 'Puspanjali' for the idols. The celebrations were largely peaceful as an elaborate security arrangement was in place.