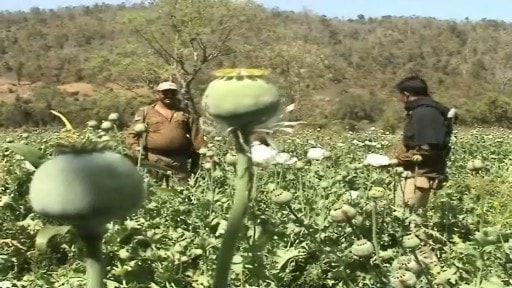 Time comes and flies by causing change in the Left Wing Extremists zone in India.The change is visible in many areas of Jharkhand where opium mafia rules the roost in absence of  any planned action taken by the long arm of the law enforcing agencies.

Sadly enough,the opium mafia operate in vast swaths of land in the rain-dependent rice belts of Naxalite-infested areas.These areas,every body knows, remained barren.Now,the opium mafia had made them use it and cultivate opium instead of migrating to other cities in search of livelihoods.

The trend is visible atleast in one place — in the Maoist-infested Arki block in Khunti district-where opium plants dot every farmer’s field in dense forest area now with the help of the suspected Maoist community initiative started after the decline in Naxal cases during past three years. Call them opium mafia.

Apart from opium mafia, farmers in this block are also growing guava, litchi, ginger, turmeric and chilli through the year. Till 2014, farmers used to worry about a recurring Naxalite violence involving two main outfits-CPI (Maoist) and People’s Liberation Front of India.

Then, the Centre’s anti-Maoists  policy was followed by the state police whose objective was to contain Naxalism. Simultaneously, many local tribals who were against Naxal violence fought against the perpetrators of violence, condemned them and supported the security forces. In turn, the incidents of Naxal cases had started to decline during the past three years.

“We are obliged to the people, especially Adivasis (tribals) who had co-operated and supported the security forces and the police. Which is why the Naxal crimes have come down quite a bit. We are trying to ensure that this age-old problem of Naxal violence ends by the year end,” said DGP DK Pandey.

With the decline in Naxal cases, peace began to gain ground on the rural side, sprouting of small entrepreneurs such as paan walah, dhaba, saloon and stationery shop owners and rise in opium cultivation for money.
No wonder why Suman Munda (name changed to protect his identity), a Maoist belonging to the PLFI, who owned two acres of barren land in Arki, introduced a new crop of opium that could be sown and sold to gain a high amount of money.

With his family support, he himself planted opium in rain water soaked soil. He also tried to convince tribals to pool resources — labour and a few acres of land — for diversification into opium cultivation. It took him several months.“It was around 2015 that some of us agreed to act upon his initiative. We earned quit a bit. Later, we learnt that growing opium is illegal,” said Sudum Munda, who was arrested and jailed to come out on bail on October 27,2017.

Records maintained by the police suggest that amid decline in Naxal cases, there has been a rapid rise in opium cultivation in Naxalite-infested remote villages of Khunti, Ranchi, Gumla, Simdega, Latehar, Chatra and Palamu districts of Jharkhand.

Police say that facing cash crunch, many Maoists had taken to opium cultivation and trading in a big way. In fact, the opium is transported to the illegal narcotic factories and dens across the country, especially in Yogi Adityanath-ruled Uttar Pradesh, Haryana and Punjab where scores of men and youngsters were getting hooked to its addiction every day.

So was the case with tribal men, women and children.”We are in a very terrible state. The problem is the opium cultivation is going on in remote areas where there are no roads and the police cannot reach easily,” said Gomeshwari Munda, IT Manager, Khunti.

The magnitude of the crime lies rooted in large consignments of opium that included its pulpous flowers, stems and raisins — all of these used in making charas and heroine — loaded in trucks and trailers were clandestinely sneaked out of the Jharkhand jungles every day and shipped to various states in the north.

The May 4 night, however, was an odd time for five traders from Uttar Pradesh.The Special Operation Group (SOG) of the police in Ranchi district tracked their truck that originated from Arki in Khunti late in the night before they accosted them and seized it near the Dassam Fall police station. All the five men on board the truck, however, managed to flee under the cover of darkness.

When the truck was uncovered, the SOG team found around 21 quintals of doda (opium stem) stacked in around 80 sacks. The truck bore Uttar Pradesh registration number Uttar Pradesh 25-T-9517. This means the poppy was headed towards the northern state, where the opium products are in great demand.

“Around midnight I got information that a truck laden with opium stems had left a village and was about to hit the highway. I soon sent a team that managed to apprehend the truck. This is one of the biggest seizures of opium product in Ranchi this year,” said Ranchi Senior Police Superintendent Kuldip Dwivedi.

Opium is abundantly grown in the remote villages of Ranchi, Khunti, Gumla, Simdega, Latehar, Chatra and Palamu districts of Jharkhand. Every part of the plant gets a price for the farmers. The raisin derived out of the pulpous fruit is way too costly, as it is the main ingredient for making heroin.

An estimated 5 kg of kada (pulpous raisin) is required to produce 1 kg of heroin. In Jharkhand, a farmer sells the pulp for as cheap as 40,000 per kg.
This easy money has lured the Maoists and other splinter groups to coerce and support farmers grow opium in areas under their control.

Every department right from the local police station to officials of the narcotic department gets a cut, people involved in the illegal trade said.
Khunti superintendent of police, Ashwini Kumar Singh, declined that his police were anyway supporting poppy cultivation and trade. “We have destructed opium cultivation on large swathes of land in the last three months,” he said.

(Parts of the story text also written by Manoj Prasad in Tehelka under title-Opium Popular Funding Source in Red Zone(,http://www.tehelka.com/2017/05/opium-popular-funding-source-in-red-zone/  )