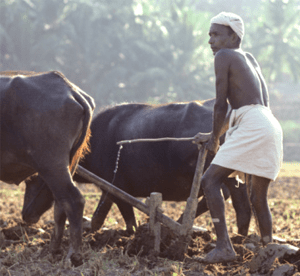 In his earthen walls made home,sitting on earthen floor,he would gently pick each one with hands,hold them and go out for ploughing paddy fields with with bullocks.Today,this farmer moved around in his paddy field too-to plough the field in the searing heat along a 4-km stretch of road between Ranchi and Lohardaga towns in Jharkhand.

His eyes looked centred around the Rain God as monsoon has failed to bring normal rains.”Look at my hands and the bullocks”,he says,showing his barren fields,without enough water to plough it with bullocks.”It seems we are going to get badly affected by draught.”

The forecast made by Meteorological department that monsoon this time will remain normal and favourable for the farmers has proved wrong in June when only 121.7 mm rains were recorded against the normal 197.5 mm rains.

Deficient rain fall has affected farming activities with farmers like Ram unwilling to to make investment in seeds and fertilizers unless rain lashed their fields.Worse affected was Palamau,garhwa,Latehar and Chatra districts where ploughing was not complete,what to talk about sowing paddy seeds.

After the Met department had predicted ‘normal’ monsoon,the State Agriculture department is on record having  arranged 3 lakh metric tonnes of paddy seeds to be made available to the farmers.Jharkhand Agriculture Director in-charge Rajiv Kumar had said that a target has also been fixed to start farming on 2 lakh hectares of unused paddy fields to be done by promoting community farming among the villagers.

Records show that there was no dearth of seeds as against the consumption of 1 to 1.25 lakh tonnes , 3 lakh tonnes of seeds have been arranged from 516 seed villages all over the State.It was to be made available in LAMPS and PACS with prescribed subsidies as per the provisions of the State Government.

Sadly,none of the farmers www.jharkhandstatenews.com talked to said any Agriculture department personnel had visited their villages and taken note of their seed requirements now when rain deficient fields await monsoon rains.Latehar Deputy Development Commissioner Anil Kumar Singh says:”The situation is not alarming.We have advised farmers to commence sowing without waiting for rains.Even if monsoon arrives in the next fortnight,this delay can be managed.”

At least Ram is not ready to take chance.”In case,the rains were deficient,we will lose money and labour”,he said echoing the sentiments of many farmers in Jharkhand.