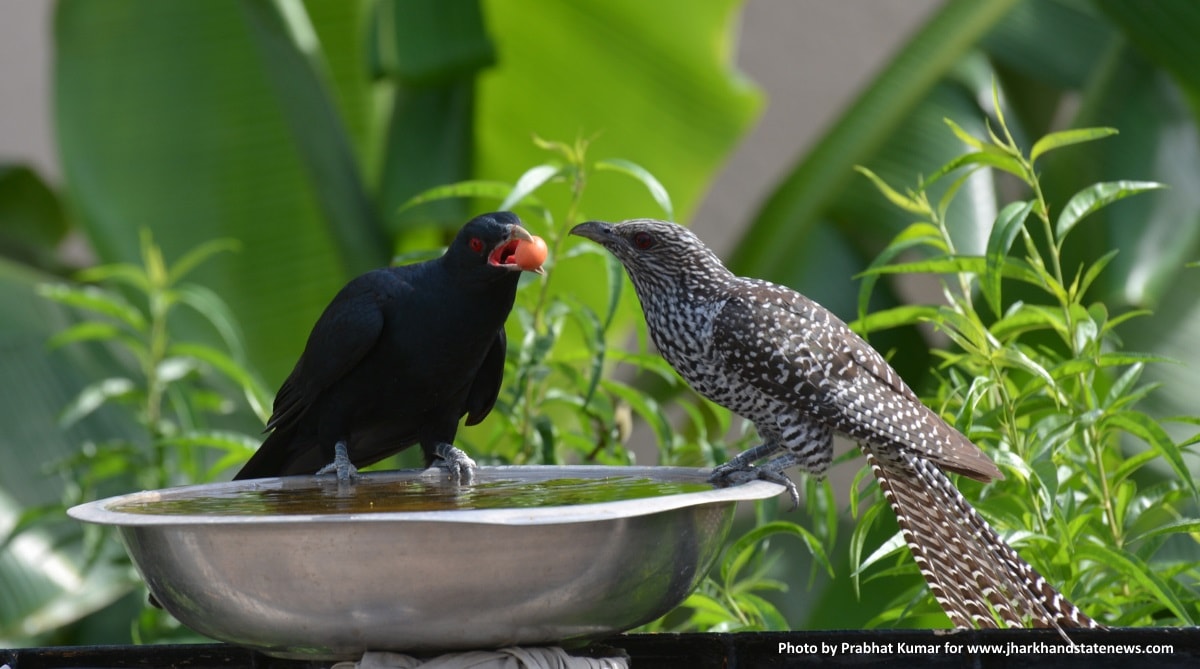 *All pictures by Prabhat Kumar for www.jharkhandstatenews.com

The morning presented a lively and enjoyable environment with cool easterly breeze. And the surrounding was abuzz with captivating sound and songs of birds near my house in Ranchi.

In the midst of this scenario, books and news papers scattered around me proved a poor company. I set them aside to concentrate on watching birds, perched atop trees, some singing gloriously, enlivening my mood. For birds are live poems in flesh, warmth and wings.

Rapt in this wonderful moment, I eyed a female Koel land soundlessly on the water-bowl placed at a distance of about twenty feet. She did not take cognizance of my being there, totally ignoring me though our eyes met. I avoided direct staring further as prolonged eye contact and sharp movement scares bird. She appeared to be quite relaxed, sipping water leisurely from the bowl as if testing it for its quality.

I could see water drops falling out from its yellow beak, glistening in the sun-rays, every time she dipped it in the water bowl. I clicked a number of shots of this beautiful female koel, attired in stars and stripes, marked prominently in white dots and bars over its brown feathers - utterly different in comparison to the shining black, uni-colour plumage of male. Female species of Koel is comparatively very shy and prefer to remain hidden inside the canopy of a large leafy tree, seldom exposing her self in the open.

I was in for more interesting surprises as spectacles unfolded right before me in the ensuing moment. A male koel alighted a few feet away from the water pot carrying a large fruit kernel in his beak. The male koel jumped over the rim of the water bowl, directly facing the lady bird. She elicited surprisingly no reaction and was maintaining a cold indifferent pose. The male, step by step moved closer, to offer the fruit, now the beaks almost touching – still no reaction from female.

A few more dancing steps by male, moving to and fro with tail feathers fanning and closing - going away and coming closer in rhythmic steps with expectation of acceptance of the fruit - all proved utterly futile! She maintained a straight, stony face, drinking water leisurely all through the episode. By this time the male appeared puzzled and frustrated. Utterly dejected, the jilted lover left with no other option, flew off with the fruit still in his beak. Perhaps it was a rookie.

The female alone now, took a few more sips, with water beads dripping from its yellow beak, also flew off to a different direction.

The drama enacted before me in my garden left me pondering over the event. It was a tragedy in true sense that left me in pensive mood. But was it not akin to our present day sequence of ‘Boy Meets Girl’ on water front? Animals including birds do exhibit anthropomorphic qualities that we human beings fail to perceive and this is a greater tragedy.