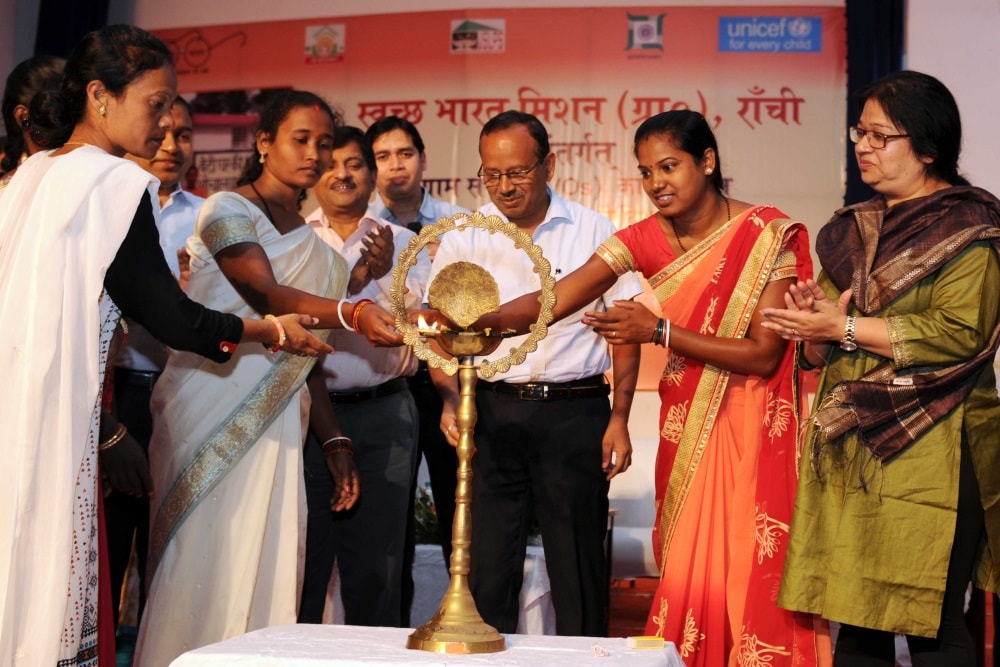 This Sammelan seeks to celebrate the initial gains and also plan ahead to make Ranchi open defecation free by 2018.

“The provision of proper toilets could save the lives of children as countries where open defecation is most widely practiced are the same countries with the highest numbers of under-five child deaths, high levels of under-nutrition and poverty and large wealth disparities. UNICEF is supporting the Departments of Drinking Water & Sanitation and Department of Rural development in planning, capacity building and monitoring at district and state level. I applaud the efforts of the women SHG members who have taken upon themselves to make Jharkhand open defecation free through community engagement and ownership.”

A.P. Singh, Principal Secretary, Department of Drinking Water & Sanitation said, “Self Help Groups (SHGs) are increasingly becoming a pillar of support for the Swachh Bharat Mission (SBM) in Jharkhand. The Giridih administration pioneered the engagement with women SHG groups for promoting Swachh Bharat Mission (SBM) in partnership with UNICEF in 2015. Since then, the Department of Drinking Water & Sanitation has taken a decision to roll out this model across the state in collaboration with JSLPS, Department of Rural Development, GoJ”.

Today, SHGs are supporting the implementation of SBM across the state. The Government of Jharkhand has given an instruction to give SBM funds Only to SHGs which are functional. Around 1343 SHGs are involved and an amount of Rs. 38.82 crores has been transferred to them in Jharkhand till June 2017.

In Ranchi, 203 SHGs have been provided funds to the tune of Rs. 5.91 Crores. They have been instrumental in quality construction as well community mobilisation in their villages.

Mr. N N Sinha, Additional Chief Secretary, Department of Rural development said, “This programme is driven by the communities’ sense of self-respect and honour. The village organizations are not contractors but agents of change in their respective villages. I am confident the village organizations will bring about the desired behaviour change.”

Mr. Manoj Kumar, DC Ranchi said, “The village organization have done admirable work in in Angara and Namkum. In the coming days, block level orientations are planned with all SHGs.”