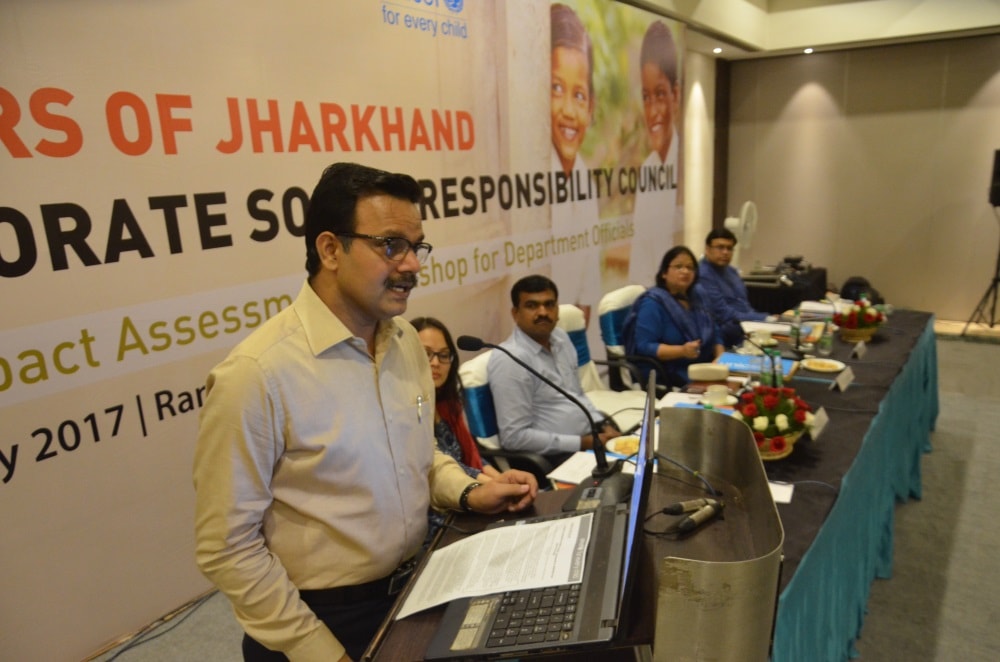 The Jharkhand Corporate Social Responsibility Council (JCSRC), Department of Industries, Mines & Geology, Government of Jharkhand in partnership with UNICEF announced the “Industry Champions for SDGs: Awards” here today. This was announced during the two and a half dayCSR Impact assessment workshop being organized for General Managers of the District Industrial Centres (DIC) and other officials of the Department.

Sunil Kumar Barnwal, Secretary, Department of Industries, Mines & Geology, GoJ said, “Jharkhand Corporate Social Responsibility Council (JCSRC) was set up by Government of Jharkhand in partnership with UNICEF Jharkhand in 2015. It is the first and only such body in India. Since its formation, CSR Expenditure in the state has gone up from INR 247 crores in 2012-13 to INR 754 crores in 2015-16. The District CSRCommittees (DCSRC) have been formed in 22 districts to advise & monitor CSR activities at the district level. The JCSRC has acted as a catalyst and provided a platform for corporates to make better use of their resources for the overall development of the states.”

He added. “This year the Government of Jharkhand, in partnership with UNICEF, is announcing the ‘Industry Champions for SDGs: Awards’ to recognizing the select companies that have inherently built-in child rights issues in their business. Companies will be awarded for their work in the areas of health, nutrition, water, sanitation, education, child protection, women’s empowerment, livelihoods and skill-building, infrastructure and climate action. The last date for applications is 31 August and the results will be announced in October 2017. The details of the award are available on the JCSRC web link on the Department of Industries website.”

He added, “The Hon’ble Chief Minister of Jharkhand who is also the Chairperson of the Governing Body of the JCSRC in the landmark meeting of 2 August 2016 identified three key priorities for utilization of CSR funds in the State. These are Swachh Jharkhand, malnutrition-free Jharkhand & ensuring clean drinking water in the State. I call on all companies to actively participate in the realization of these goals.”

Dr. Madhulika Jonathan, Chief UNICEF Jharkhand said, “The last few decades have seen a shift in society’s understanding and awareness of the impact and role of business in society.  For UNICEF, a focus on corporate social responsibility (CSR) has entailed a reflection on how business affects the lives of children and the fulfilment of their rights.The JCSRC has brought the Government and businesses together on a common platform to achieve the development goals in a convergent manner. UNICEF will continue to work with the JCSRC in making these Global Goals Local – in developing innovative business models to achieve the SDGs 2030. UNICEF is committed to continuing our engagement with the Government of Jharkhand as it takes big strides towards achieving the SDGs.”

K Ravi Kumar, Director Industries, GoJ said, “Today’s workshop will build the knowledge and capacities of the General Managers, Industrial Extension Officers (IEOs) and Ease of Doing Business (EODB) managers in the District Industrial Centres (DICs) who have been tasked with facilitating the CSR activities through the District Corporate Social Responsibility Committees (DCSRCs) at the district level.”

Releasing the ‘Two Years of Jharkhand Corporate Social Responsibility Council (JCSRC): A retrospect’ document he added, “This document presents a glimpse of the progress made and the CSR initiatives of companies in Jharkhand. This document will be a good reference document for the government functionaries, corporate, non-government organisation, media and public at large on CSR and related aspects.”

Dr. Deepak Gupta, Principal Trainer & UN Development professional said, “The concept of corporate social responsibility has come a long way and yet it has miles to cover. Initially, some business houses were primarily engaged in Charity activities that were reaching a select set of people though these were not strategically aligned with the national plans and priorities. Many industrial groups, while evolving further in addressing their community welfare activities, begun establishing Foundations that have been active in the CSR work. However, with an emergence of a legislative framework on CSR in the year 2013, India has a long way to go in strategizing the community-development work in close partnerships with Districts’ based corporates. There is a critical need for results-based and tailor-made local strategic-designs for a more focused CSR and the current skills-building CSR design workshop – organized by the Dept. of Industries and UNICEF/Jharkhand - is giant leap towards the same goal. This initiative is about the "Social Contract" and the Strategic-Design in the area of CSR partnerships, which is attuned to mobilizing resources in helping communities attain SDGs.”