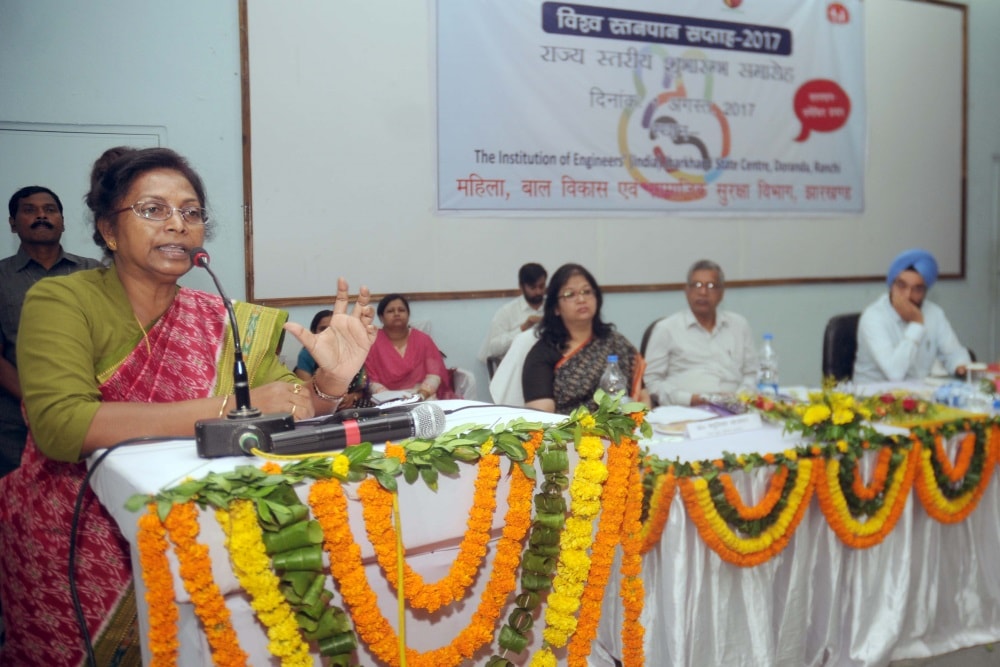 *Pics show Jharkhand Minister Louis Marandi,Dr. Madhulika Jonathan, Chief of UNICEF Jharkhand and Secretary(Women and Child Development), MS Bhatia and others participating in the programme organised by the state government.

Launched on August 1 at the Institution of Engineers India, Doranda Ranchi,it entered its second day on Tuesday.UNICEF backed the state government's move.

It is pointed out that breastfeeding is a vital part of providing every child with the healthiest start to life. It is a baby’s first vaccine and the best source of nutrition. It can bolster brain development and saves children’s lives.

Here the question is where stands Jharkhand in breastfeeding?

Early initiation of breastfeeding rate in Jharkhand is only 33% whereas complementary feeding (for children 6 - 8 month) is 47%. Only 7% children (6-23 months) gets an adequate diet,according to the National Family Health Survey (NFHS) 4 data of the Government of India.

"Breastfeeding also nurtures national economies. The benefits of breastfeeding for children and their mothers have the power to improve a country’s prosperity with lower health care costs and stronger, more able workforces",said the press statement issued by UNICEF.

More,it said that breastfeeding is not just a one woman job."It requires encouragement and support from skilled counsellors, family members, health care providers, employers, policymakers and others."

Dr. Madhulika Jonathan, Chief of UNICEF Jharkhand says, “Breastfeeding is critical for the achievement of many of the Sustainable Development Goals (SDGs). Breastfeeding gives babies the best possible start in life by improving their nutrition, preventing child mortality and supporting their cognitive development and education. Breastfeeding is one of the most cost effective investments Jharkhand can make to improve our social and development indicators.”

The theme of the World Breastfeeding Week, observed 1 - 7 August, is ‘Sustaining Breastfeeding Together’ which seeks to highlight the importance of breastfeeding for children and nations.

Breastfeeding can offer a fair start in life for every child

* Early initiation of breastfeeding is associated with lower mortality rates.[i]

* Longer periods of breastfeeding are associated with a reduction in a child’s risk of being overweight or obese.[iv]

* Breastfeeding is associated with an IQ increase of 3 to 4 points.[v]

* Providing support to mothers to breastfeed could cut the incidents of diarrhoea by half and respiratory infections by a third.[vi]

Breastfeeding is not a one woman job. It depends on support from families, communities, health care providers, employers and governments

* Health care professionals can influence breastfeeding practices at critical moments, however, many lack the knowledge and skill required to support women who want to breastfeed.

* Community-based interventions such as group counselling and education can increase timely breastfeeding initiation by 86 per cent.

* One study on breastfeeding indicated that interventions such as maternity leave, workplace support led to a 30 per cent increase in breastfeeding rates.

The Mother’s Absolute Affection (MAA) programme of the Department of Women & Child Development, Government of Jharkhand was launched in September 2016 by Chief Minister Raghubar Das. The programme focuses on providing counselling services to mothers and family and shows the Government’s commitment towards the cause of breastfeeding.

What needs to be done?

The Infant Milk Substitutes, feeding bottles and infant food (Regulation of Production, Supplies and Distribution) Act 1992 needs re-enforcement and effective implementation. The Maternity Benefit Act should be implemented and mothers provided support in the work place.