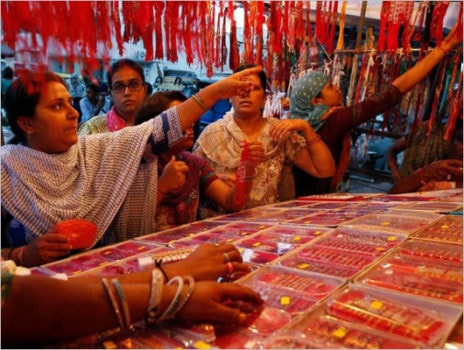 *Sisters buying made in India rakhis in Ranhi.Pic by Ratan Lal

At a time when the stand off between China and India in Doklam continues,Rakshabandhan is take place and Chinese rakhi sellers are at a loss across Jharkhand.

As it is,Rakshabandhan,an annual Hindu festival meant to wish for ‘Raksha’ (Protection) through ‘Bandhan’ (Strengthened Relation),is celebrated with celebrated with huge fervor across the world.

This year,this festival is taking place on August 7-Monday -when lunar eclipse is beginning at 10.52 pm making the suitable time for tying rakhis between 10.30 am and 1.52 pm- has shortened to three hours,This is the time when a sister ties rakhi around her brother’s wrist while brother reiterates his wishes to protect his sister from devil forces  until her death.

Sisters tying the sacred thread around the wrists of brothers is a symbol of attachment, meant to strengthen their bond of love.Businessmen make use of the festival to use handwork and innovation to manufacture and sale rakhis.To compete with businessmen in India,their counterparts in China had dealers across the country to sale Chibnese rakhis.

Incidentally,since  Made in India rakhis were costly, imported rakhi from China  has been ruling the market due to its looks, varieties and cheap cost. From malls to roadside stands, there has been a heap of Made in China rakhi available on the festival of siblings and remain in huge demand. This was till last year.

This year, the buyers are looking for India-made rakhi. According to news agency ANI, women are coming to stores and asking for Indian rakhis. This inclination towards local rakhi may be due to the ongoing stand-off between Indian and Chinese troops at Doklam in Sikkim.

In any case,notwithstanding the reason, the emergent situation has helped promote local Rakhi makers and lead to an increase in demand for local rakhis this year, as compared to previous years.www.jharkhandstatenews.com sponsored survey showed that customers had bought India-made rakhis more than Chinese rakhis.

“When our rakhis were available in the market and their designs were much better than Chinese rakhis,we preferred local rakhis”,said a woman.Yet,there were customers who praised Chinese rakhis and complained  about high price of local rakhi.

One shop owner echoed the sentiments of a dozen shop keepers saying it was due to low supply of the local product,we were compelled to buy Chinese rakhis.Another  shopkeeper in Jamshedpur said, the supply of rakhi was lower than previous years, which led to an increase in their prices.