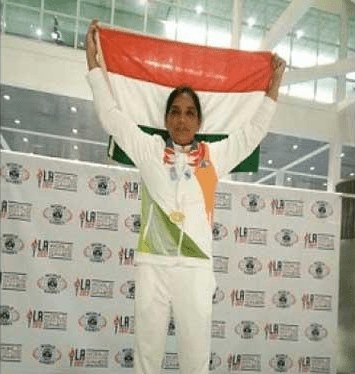 As India celebrates the 70th Independence Day on August 15,police personnel are proud.This time not just to salute the national flag,but to see their 37 -year old female colleague raising the Tricolour  in Los Angeles.

Aruna Mishra,Inspector of the Jharkhand police in Jamshedpur,had won Gold less than 48 hours before the Independence day in the World Police and Fire Games in Los Angeles,US.Incidentally,this was third in this tournament after 2011 and 2015 that were held in New York and Virginia,

Mishra,mother of two girls,wife and boxing coach,who runs  an academy for budding pugilists at Birsanagar in Jamshedpur had won the Gold by defeating Canadian Yannick Fortin,making her colleagues in the state police and the state of Jharkhand proud.

"She has proved that she was on top of the world because of her hard work,determination,confidence and sincerity to practice on a regular basis despite her family engagements",said Sumit Kumar,a constable,who is her fan.

In Ranchi,Chief Minister Raghubar Das is hoisting the Tricolour in presence of 20,000 citizens and 14 platoons of Indian Army,CRPF,Jharkhand Armed Police,and NCC cadets participating in the parade.

"We salute Aruna Mishra for putting us on Cloud 9 this Independence day",smiles Sudhir Murmu,a constable while doing rehearsal in Morahabadi Maidan in Ranchi.