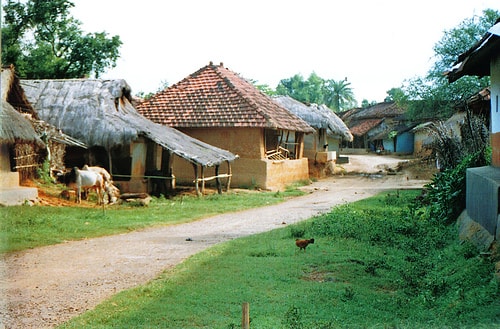 This was on Saturday when members of the most primitive tribe Birgia inhabiting forest areas in Latehar district were yet to wipe out tears from their eyes.Reason?

Their two members had recently died after failing to get any medical attention.In their village,over a dozen Birgia tribals from Hethdih and Mangara villages in Maoist infested Garu block of Latehar were suffering from Malaria and still awaited medical treatment.

None of them were aware of the BJP government sponsored second leg of the investors meet in Jamshedpur despite mega advertisements along roadsides and front pages of newspapers reading:70 companies to make investment and provide "22 Thousand jobs".

As it is,early this year,the BJP government had held the state's ,maiden global investors meet in Ranchi investing a whooping sum of over Rs 80 crores in show casing the state's `mineral resources to attract investors.The Das government had claimed that it had signed 210 MoUs promising Rs 3.30 lakh crores worth investments.

On Saturday,the Das government claimed that during the past six months the project implementation works connected with 91 MoUs had started."Sirf Wade Nahi...Hakikat"(Not just announcement...Fact)."Since we formed the government in December 2014,industrialists' perceptions toward the state have changed and they have started taking interest in putting up their units here",said Das while addressing Momentum 2 meeting in Jamshedpur.

While it remains to be seen when 70 companies' foundation stones laid by the CM Das online fructify and how many jobs they had actually provided to the unemployed youths in Jharkhand,a report in the Hindi Daily Prabhat Khabar.com claimed that the state government had provided land to many of these companies.

These ought to be viewed with positive eyes.However,it is not known if any transparent and legal criteria was followed by the state government to identify a private company to transfer its land for setting up industry; whether any of these companies had made payment of the land transferred to it by the state government,if any;and whether or not  its cost was evaluated on its current market rate.

At a time when the Raghubar Das government was busy projecting itself as 'committed' to provide "corruption free governance to facilitate industrialization,some observers took it as 'honey act' used by many stupid politicians to gain image.Also,none of the well known neutral industrialists and businessmen who suffered untold miseries from power shortage regularly,have hailed it yet.

In any case,the malaria affected Birgia tribals were far away from the ongoing 'industrialisation' in their homeland.As the Das government remained stuck with its own agenda,they continued to suffer from the age old problem-vector -borne diseases like malaria,filaria and kala azar.

The WHO in its report has said that in river and forest areas,the people(especially tribals) experienced periodic malaria epidemics.The duration of malaria would increase in areas where it is now endemic,the report said long ago in 2006,according to the Indian Express ,October 8.2006.

Since there is no direct connectivity between industrialisation and malaria epidemic,the response of the Raghubar Das government to Birjias' woes can be imagined.Yet,in Jharkhand where the Left Wing Extremists continued to exist,industry can never flourish leaving Birgia tribals weep in their own homeland.