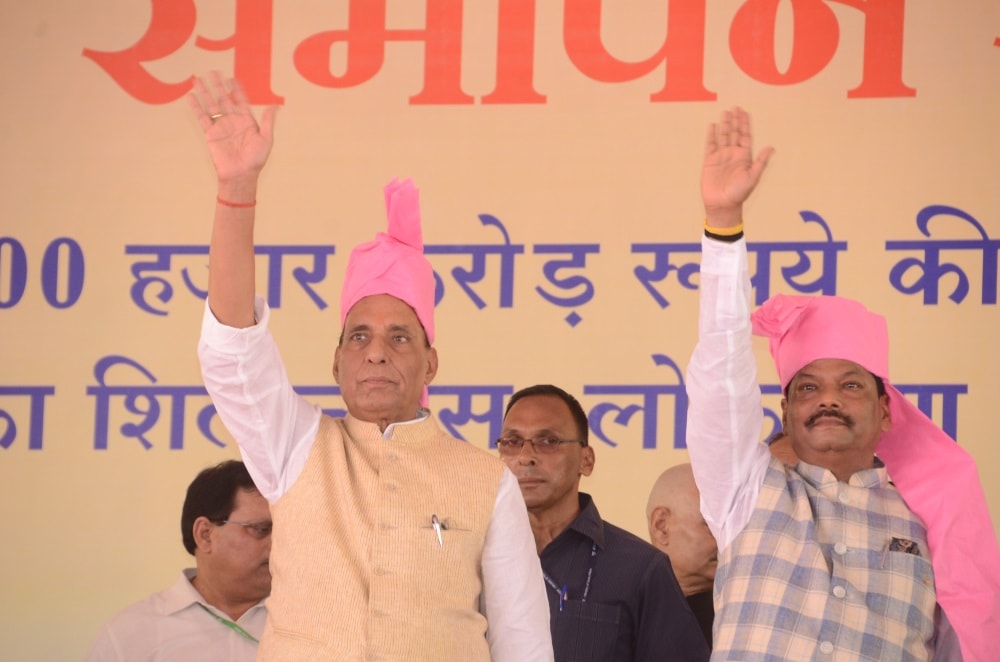 Home Minister Rajnath Singh was today in Dumka as the chief guest at the Garib Kalyan Mela, organized on 1000 days of completion of the state government.

Speaking on the occasion,he said that the Chief Minister of the state has done wonderful work in 1000 days. The responsibility of the state government was properly discharged. The dream with which the separate state of Jharkhand was envisaged is now being realized. He further added that there has never been shortage of human resources & natural resources in Jharkhand, what has been lacking was implementation of work in a planned manner. He optimistically said that in the coming days, Jharkhand will stand in the category of developed states of the country.

Speaking on the issue of Naxalism in the state, he said that Naxalism should not create constraints in development work, or mislead tribals in picking up guns.  He also said that the support base of the Maoists is shrinking and Naxalism would end soon no matter what. He urged the Naxals to give up their arms under the states Naxalite surrender policy and join the main stream of the society.

The Home Minister said that India is among those handful nations whose economy is developing rapidly. India is no longer a weak nation. India's head is high in the whole world and it all happened in the efficient leadership of the Honorable Prime Minister Narendra Modi. He warned Pakistan that if it dares of any wrongdoing on the border, then India would not hesitate to give apt reply.

Chief Minister Raghuvar Das said that his government completed 1000 days due to the blessings and cooperation of the people."I bow to the people of the state to provide this feat" - he said.

On the occasion, a book 'Badalta Dumka, Dazzling Dumka' was released and Mayurakshi Silk Village was inaugurated by Hon'ble Home Minister, Chief Minister and others.