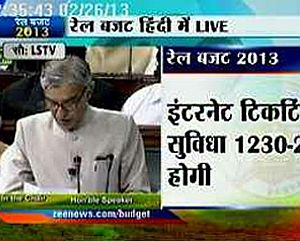 Tata Steel has described the Railway budget 2013-14 as ‘progressive’ “We see this as a progressive budget as it talks about investment in infrastructure including PPP for port connectivity as well as first and last mile connectivity to mines and customers. However, rise in freight due to fuel surcharge will have an adverse impact on the steel industry which uses railway infrastructure extensively”,said Tata Steel’s VP, Corporate Services,Sanjiv Paul.

“In the last 12 months there has been a sharp increase in freight rates (about 25-27%). This will certainly lead to a shift from rail cargo to road. This is already perceivable as the growth in cargo freight was only 4% last year (from 1007 million tonnes to 1047 million tonnes)”,Paul added.

“Further, there is no indication of investment in rolling stocks which will lead to a shortfall in wagon availability in the future. Support for Industries from railways remains uncertain and there will be an increased pressure on operating costs as every 6 months fuel price adjustment will be undertaken.”