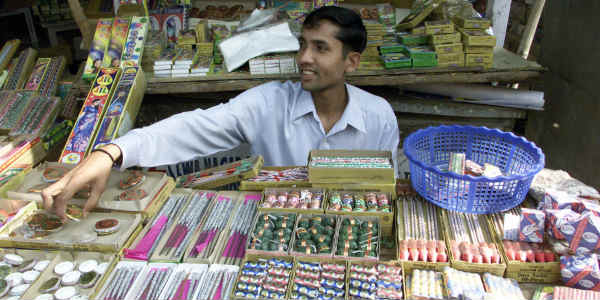 When comes Diwali,house is cleaned and walls white washed.Things were no different this time except the fact that the rain god set a record by cleaning the air and the sky on the day of festival of lights in many parts of Jharkhand.

In Ranchi,even the dirty roads and by lanes were cleaned by drops of rains.Every body knows that love can crystallize things."When Love is in the air,distressing rain can become a wonderful avalanche of shimmering diamonds",said a school teacher Sudhir Singh quoting Erik Pevernagie,a poet.

However,with drops of rain falling in tits and bits throughout the day,fire crackers,diyas and sweets along the road sides were affected.As a result,the festival of lights turned out to be dark one for them.

Also,due to late issuance of licenses and growing environmental awareness among people,fire -crackers sales in the city slumped by 40-50 percent.Dealers say the rain god spoiled their trade and bussiness.

As the evening set in and rains stopped,Diwali saw scores of people attended fire work displays,prayers and celebratory events across the state

As it is,Diwali is Celebrated by Hindus, Sikhs and Jains for a variety of reasons.The main theme is the triumph of light over darkness and good over evil.

Also known as Deepavali, a Sanskrit word meaning “rows of lighted lamps”, it is one of the most popular Hindu festivals celebrated across South Asia.  But it is also celebrated by Jains and Sikhs.

The festival  sees millions of earthenware oil lamps, called diyas, light up people’s homes, shops, public spaces and places of worship as part of celebrations which marks the start of the Hindu new year.

When is it celebrated?

Diwali falls between October and November, but the exact date changes each year as it is marked by the Hindu lunar calendar.

It lasts five days in total, with the festival of lights falling on the third days of celebrations, which is marked on the 15th day of the Hindu month Kartik.

This year that falls on 19 October.

For many Hindus, Diwali celebrates the return of the deities Rama and his wife Sita to Ayodhya, an ancient Indian city believed to be the lord’s birthplace, following a 14-year period in exile and a battle fought by Rama and his army against the demon Ravana.

The demon had kidnapped Sita and Rama travelled along with Hanuman, the deity in the form of a monkey-man, to rescue her and kill the evil demons - as depicted in the epic "Ramayana".

Their victorious return home was celebrated by lighting the kingdom with lamps.

Diwali also celebrates the goddess of wealth and prosperity, Lakshmi. Some believes it falls on her birthday and the day she married Lord Vishnu.

Many in India leave their windows and doors open and light lamps to allow Lakshmi to find her way into their homes.