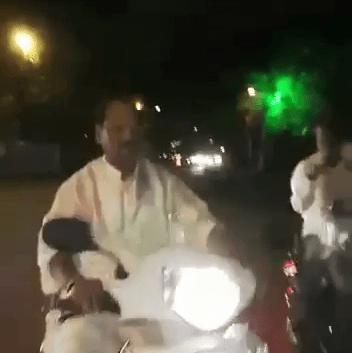 Almost a year after the police provided helmets to 5000 citizens,Chief Minister Raghubar Das drove a mo-bike without helmet in Ranchi on the Diwali night.

"It is shame that the CM himself violated the traffic law",said a citizen echoing sentiments of many citizens in the state capital Ranchi where Das had launched the helmet campaign

The police records show that over 15,000 people had assembled at Morahabadi Maidan from 5 am in the morning on October 23,2016 in hopes of getting a free helmet.Subsequently,5000 were given helmets on first come first serve basis.

The programme was inaugurated by Chief Minister Raghubar Das. He is on record saying:"Law is same for all be it the chief minister or a police officer. It is the duty of everybody to follow rules. People should wear helmets themselves and encourage others to wear helmet as well."

On this occasion Das had directed DGP DK Pandey to assure that policemen also follow traffic rules and wear helmets or seatbelts."Despite daily news about road accidents people do not seem to understand the necessity of wearing seatbelts or helmets. Traffic police should make citizen aware about traffic rules," the CM is on record having said directive the traffic police to implement the traffic rules strictly after Chhath festival.

A year later,now when the Chhath festival is slated to start on October 24,many traffic policemen were laughing and smiling."This CM is Balborda",quips a constable arguing that he has become a subject of joke in corridors of power.

Incidentally,helmets were given to only those who had submitted a copy of their driving license and vehicle owner book last year.Whether the CM carried license and helmet is not known