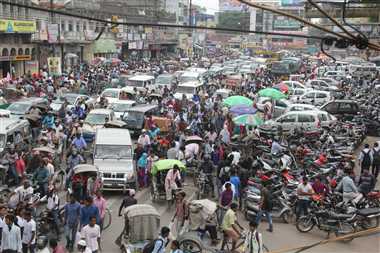 Two mega plans are afoot to end to chronic traffic chaos in the capital city of Jharkhand. First is connected with use of integrated intelligent traffic management system to keep tabs on traffic rule violators.

The Police Traffic Department's proposal to the police headquarters is to install special type of cameras across the city to identify the traffic rule violators."High Tech cameras are expected to be installed.A tender toward this end is going to be published soon.

After these high tech cameras are put up across the city,triple riders on two wheeler's will be spotted and action taken against them.Also,density of traffic will be watched by these high powered cameras."This will help us contain the traffic law violators",says SK Singh,SP(Traffic).

Another plan is connected with the decision of the state government to declare the Main Road from Shahid Chowk to Over Bridge as Mall.This means that cycles,rickshaws,cars,buses and trucks will not be allowed to move during the prime times in the evening.

This part of the Main road in Ranchi is a hub of business activities and is the famous shopping centre.The plan is expected to be implemented with effect from November 15,the day the state government is gearing up to organise a fortnight long programme to celebrate its establishment on November 15,2000.

For long this road has been a nightmare for the commuters, passengers; vehicle owners and the traffic police.Put succinctly, the number of vehicles plying on this road is increasing rapidly but its shape remains the same.This was not widened as there is no scope to widen them.

One Over Bridge-Flyovers -was built in 1970's.It had eased traffic congestion to some extent but the intensity of the problem remains. The narrow streets are further squeezed by street vendors and encroachers and the administration including the police has become helpless in tackling the situation.

Even the High Court many a time had intervened and desired the Traffic Department to bring about reforms that would mean some relief to the commuters. Sadly,even its pleas have gone unheeded.

It is true that all blame cannot be brought to the doorsteps of the traffic police. There are numerous agencies involved in the matter and unless there is a comprehensive scheme of modifying and modernizing entire traffic system,the plan to make this Mall free from hassles may not succeed.