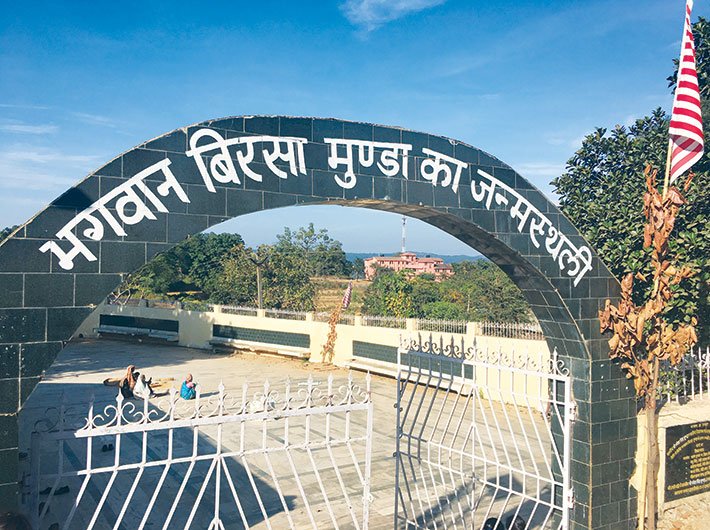 Twelve o'clock this afternoon was no different from everyday in this village-Ulihatu in Khunti district,whose only claim to fame is that it houses a 'historical landscape'-the birth place of tribal hero Birsa Munda.

The workers were busy cleaning the waste near the ancestral home of Birsa Munda whose birth anniversary coincides with the 17th establishment day of the 28th state of the Indian Union on November 15 when President Ram Nath Kovind is slated to inaugurate a cultural function at Morahabadi Maidan in Ranchi,71.8 km from Ulihatu.

To get the function inaugurated by the President Kovind,the ruling BJP and the state government have chalked out mega plans.To begin with,they have decided to mobilise tribals,make them wear traditional dress,perform rituals at Ulihatu,walk in a procession by carrying a pack of soil and hand it over to the President at Morahabadi.

The walk will mark the beginning of the BJP's campaign -'Ham Chale Gaon Ki Aore(We move toward the village).This means the BJP workers and supporters plan to hold processions.

Alongside,the state government has come up with a series of programmes.One,a tourist complex scheme envisaging to develop Patratu is scheduled to be inaugurated by Minister of State for Civil Aviation Jayant Sinha and Chief Minister Raghubar Das on November 11.Two,The Health Insurance Scheme for 68.57 lakh poor families is slated to be launched on November 15.

As per the Insurance scheme,every family covered by it will get facility to get treated in any hospital with expenditure going up to Rs two lakh."As per the dreams of Prime Minister Narendra Modi,we are making a new Jharkhand where none of the poor families will die due to lack of fund and he/she will get treated under the Mukhya Mantri Swasth Yojna",states the CM.

Though all these schemes were advertised on top pages of all newspapers and magazines,Ulihatu has reacted with apathy.In front of the modest entrance of Birsa Munda's home,elderly sat around the tree after a hard day's work in the paddy fields.Eyes burnt with light of the sun as the women with hens and goats loitering around."Have you come to see the house of Birsa Munda",a young man questioned when one introduced oneself as a journalist.

"Even if there are 50 promised schemes,our condition will remain unchanged",said one.There was silence again.Apparently,none had gathered to tune in to the special function organised by the BJP government led by the CM Raghubar Das in Jharkhand.

Even the school master,a 30-year old graduate from Khunti college,and a father of five already had nothing to say."We will see what happens."A little probing revealed that he was barely aware that the President Kovind is arriving on the occasion of the establishment day function of the state and 'Ham Chale Gaon Ki Ore' programme was announced by the BJP in Jharkhand.     .      .