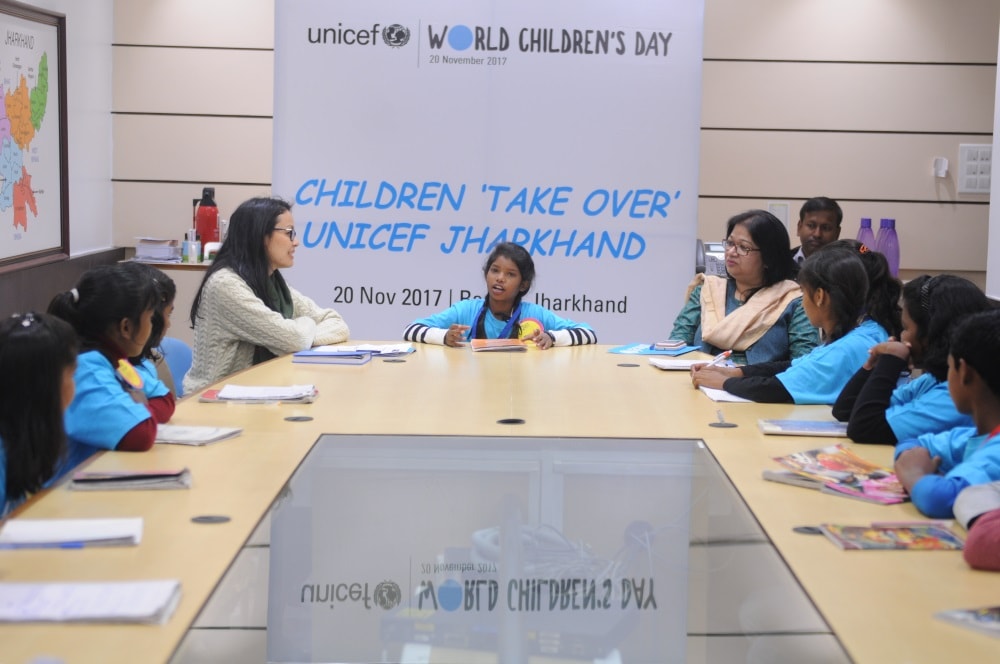 *All images by UNICEF, Ranchi

13 year old Payal Kumari from the Government Upgraded Middle School in Namkum, Ranchi was announced UNICEF Jharkhand Chief for a day on the occasion of World Children’s Day (20 Nov).  She along with 20 children ‘took-over’ the UNICEF office and the Child Friendly Police Station (CFPS) in Lalpur Ranchi here today.

Dr. Madhulika Jonathan, Chief of UNICEF Jharkhand said, “November 20, marks the anniversary of the adoption of the United Nations Convention on the Rights of the Child (UNCRC) and the mobilization of the first World Children’s Day. It is a day for children, by children with a single message to bring child rights into public focus and highlight the strong connection between child rights and human progress. The central idea is for children to take over key moments in diverse spheres of life including the UNICEF office and the police station on the World Children’s Day.”

Addressing the UNICEF staff Payal said, “It is a proud moment for me that I have been designated UNICEF Chief for a day. As a child reporter, I am aware of the rights of children under the UNCRC which are the right to survival, development, protection and participation. This has given me an opportunity to be the voice for countless children. I dream of a future where all children are healthy, safe, protected and in school.”

During the programme in UNICEF office, child reporters Droupati, Shivam, Khushboo, Anshu, Surabhi, Shikha, Farheen and Suraj read out poems written by them and sung songs about their hopes and dreams.

Thereafter, the children travelled to Lalpur to ‘take-over’ the Child friendly Police Station (CFPS) where they interacted with the station officials and inspected the thana.

Addressing the children at the CFPS, Raj Kumar, Raj Kumar, Deputy Superintendent of Police & nodal officer for the Special Juvenile Police Thana in Ranchi district said, “The police is a friend, a teacher and a guardian for all children. We work to protect your rights and ensure your best interest is top priority.”