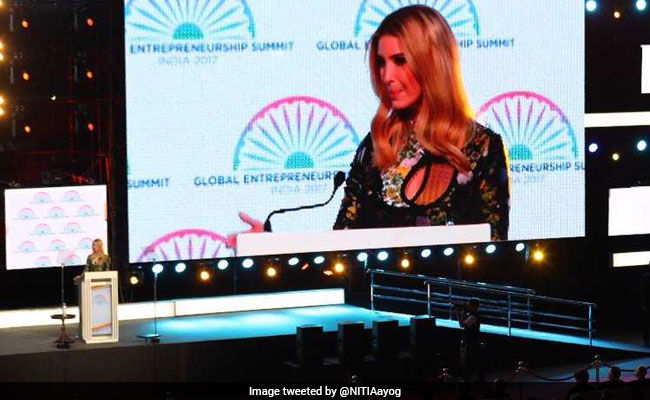 In public interest,www.jharkhandstatenews.com is carrying the entire speech of Ivanka Trump,Special Advisor to the President of the USA,who landed in Hyderabad and addressed the 'Global Entreprenrurship Summit 2017 in presence of the Prime Minister of India,Narendra Modi.

Here is her speech:

On behalf of the United States, and the 150 other countries represented in this room, thank you for hosting The Global Entrepreneurship Summit here in Hyderabad – a city that is quickly emerging as the innovation hub of India.

And thank you, Prime Minister Modi, for joining us here today – and for all that you are doing to build India as a thriving economy – a beacon of democracy – and a symbol of hope to the world.
What you are achieving is truly extraordinary.

From your childhood selling tea to your election as India’s Prime Minister, you’ve proven that transformational change is possible. And now you are bringing that promise to hundreds of millions of people across your country. Thank you.

To the people of India, I want to congratulate you as you celebrate the 70th anniversary of your Independence.

You are celebrating it as the world’s largest democracy, and one of the fastest growing economies on earth.

Through your own enterprise, entrepreneurship, and hard work, the people of India have lifted more than 130 million citizens out of poverty – a remarkable improvement, and one I know will continue to grow under the leadership of Prime Minister Modi.

All of you are helping India’s middle class reach its goal of nearly 500 million people by 2030.You have opened new universities across the Country. Your doctors and scientists are discovering medical cures and life-saving technologies. Your engineers and architects have built modern wonders that grace your skies. And Indian spacecraft have traveled to the Moon and to Mars.

The people of India inspire us all.

This is the first time India has hosted the Global Entrepreneurship Summit.  It is a symbol of the strengthened friendship between our two peoples, and the growing economic and security partnership between our two nations. As President Trump said earlier this year: India has a true friend in the White House.

I would like to thank the State Department for co-hosting this incredible gathering. I also want to thank Governor Narasimhan and all elected Indian officials who are here tonight for welcoming us to your beautiful country.

It’s wonderful to be in this ancient city brimming with transformative technology – now, your tech centers may, may even outshine your world-famous Biryani.

CEOs like Microsoft’s Satya Nadella went to school right here in Hyderabad.  Just a few kilometers away, T-hub’s brand new facility is set to open next year – and will become the largest incubator in Asia.

In this “City of Pearls” the greatest treasure is YOU – the dreamers, the innovators, entrepreneurs, and leaders who never give up – never abandon your aspirations – and always strive for a bettertomorrow.

Today, we come together to celebrate what is happening here in India, what is happening in the United States – and all over the world: entrepreneurs are revolutionizing our economies, and improving our societies.

You are rewriting the rules.

You have the inspiration and drive to serve our communities through the projects you start and the businesses you build.

You have the grit – the perseverance – and the WILL to succeed.

Each of you started with an idea. You’ve worked long days and nights to code the next robot, create the next app, find the next cure, and discover the next breakthrough to improve the lives of millions of people.

Some may have tried to convince you that the risk is too great – and the reward too small.
But you are here today because you are not afraid to fail.  You want to OWN your future.
So, I want to congratulate you on all you have already accomplished.
And I especially want to congratulate the women entrepreneurs here today.

This year’s Summit is focused on a theme that is key to our future: WOMEN FIRST, PROSPERITY FOR ALL. I am proud to say that for the first time ever, women make up the majority of the 1500 entrepreneurs selected to attend this summit.

I see all of you out there.

Only when women are empowered to thrive;will our families, our economies, and our societies reach their fullest potential.

As a former entrepreneur, employer, and executive in a male-dominated industry, I have seen first hand that all too often, women must do more than their male counterparts to prove themselves at work, while also disproportionately caring for their families at home.

After my father’s election, I saw an opportunity to leave my businesses for the privilege of serving our country and empowering all Americans to succeed.
Our administration is advancing policies that enable women to pursue their careers and care for their families, policies that improve workforce development and skills training, and policies that lift government barriers and fuel entrepreneurship so that Americans can turn their dreams into their incredible legacies.

In the last decade, women have made remarkable strides in starting new businesses.
Globally, between 2014 and 2016, entrepreneurship activity amongst women increased by 10 percent.

In the United States, within the last decade, the number of women-owned firms has grown by 45 percent. Even more promising, minority women have started nearly 8 in 10 new women-owned businesses.

Today, more than 11 million women in the United States own businesses. They employ nearly 9 million workers, and generate over $1 trillion dollars in revenue.

Many women become entrepreneurs and job creators out of necessity – some weren’t given the flexibility they needed at work to care for their families. Others lacked professional sponsors, or weren’t given a fair shot at a promotion.

Instead, women, like many here today, are charting their own courses and achieving incredible feats.

Fueling the growth of women-led businesses isn’t simply good for our society – it’s good for our economy. One study estimates that closing the gender entrepreneurship gap world-wide could grow our global GDP by as much as 2percent.

The women in this room can help lead the way to closing this gap and ushering in a new age of greater prosperity.

Yet, despite the soaring rate of female entrepreneurs, women still face steep obstacles to starting, owning, and growing their businesses.

In developing countries, 70 percent of women-owned small and medium-sized businesses are denied access to capital. The result has been a nearly $300 billion dollar annual credit deficit for women entrepreneurs in the developing world.

We are working to reverse this trend. The U.S. Small Business Administration, for example, increased its lending to women by over $500 million dollars this year alone.

When it comes to networks and mentorship, roughly half of women in the United States say they have difficulty finding a mentor.

Yet, mentorship is critical to success as each of you knows. Entrepreneurs need professional guidance to help them start and grow their businesses.

In the United States, we are fostering mentorship through programs such as SCORE – a nationwide initiative where successful men and women coach those who want to become their own CEOs.

And when it comes to equitable laws, while many developed and developing countries have made tremendous strides, there is still much work to be done.

In some countries, women are not allowed to own property, travel freely, or work without the consent of their husbands. In even more countries, the cultural and family pressure is so great that women do not feel the freedom to work outside the home.

Our Administration is striving to promote greater opportunity for women around the world, both through our domestic reforms and our international initiatives.

This summer, at the G20 conference, the United States was a founding member of a bold, new initiative with the World Bank – the Women Entrepreneurs Finance Initiative, also known as WeFi. This facility provides access to capital, networks, and mentorship for women in developing countries.

WeFi is the first facility to support women entrepreneurs at this scale, and we anticipate it will be able to leverage in excess of $1 BILLION dollars in public and private financing. This facility also seeks to address the legal and regulatory barriers that limit opportunities for women entrepreneurs.

In the last decade, USAID has promoted women entrepreneurship through a number of programs, including providing micro-finance loans to women in Afghanistan, and bringing Internet access to women in Nigeria and Kenya.

USAID Administrator Mark Green is with us here today.

Where are you Mark?

I want to thank him and the entire U.S. delegation for their tireless work to improve the lives of millions, both domestically and abroad.

Further, as you can all attest, this Summit is yet another powerful example of a U.S. initiative that connects entrepreneurs around the world with investors who believe in your mission and will champion your success.

I want to thank the U.S. business leaders who have traveled all the way to Hyderabad for this inspiring event. I also want to congratulate the more than 350 American entrepreneurs who were selected to be here with us to represent America’s brightest talent.