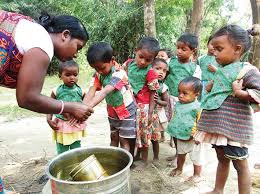 Reacting to the Union Government's approval to launch of the National Nutrition Mission (NNM),experts in Jharkhand have welcomed the move.

"It is going to benefit lakhs of poor people whose children suffered from malnutrition",said Ranjit Agrawal,echoing the sentiments of many activists.

The centre's move aims to tackle the problems of under-nutrition, low birth weight and stunting, with a budget of Rs 9,046 crore for a period of three years.In Jharkhand,according to National Family Health Survey*NFHS),3 (2005-6),about half (47.2 per cent) of the children under three years were stunted or too short against their age,an indication of undernourishment.

More,nearly one-third(35.8 per cent) children are wasted,or too thin for their height.This may result from inadequate recent food intake or a recent illness and about 54.6 per cent are underweight which takes into account both chronic and acute under-nutrition.

With an aim to fight against this menace,several agencies including Malnutrition Department of Social Welfare,Women and Child Development in collaboration with health department and technically supported UNICEF had been carrying schemes across the state.

Now,the mission, commencing 2017-18, has set a target to reduce under-nutrition and low birth weight by 2 per cent each year.It can help and strive to achieve reduction in stunting from 38.4 per cent as per the National Family Health Survey-4 to 25 per cent by 2022.

In any case,the centre's move clearly aims to bring down anemia among young children, women and adolescent girls by three per cent per year.In the country,more than 10 crore people will benefit from the programme, according to an official statement.

All the districts including those falling in Jharkhand under the mission in a phased manner -- 315 districts in 2017-18, 235 districts in 2018-19 and remaining districts in 2019-20.The centre's focus is to make use of information communication technology to monitor the implementation of the scheme as well as to check pilferage in distribution of supplementary nutrition at anganwadis under the Integrated Child Development Scheme, according to the statement.

Anganwadi workers may be offered incentives for using IT-based tools such as smart phones.