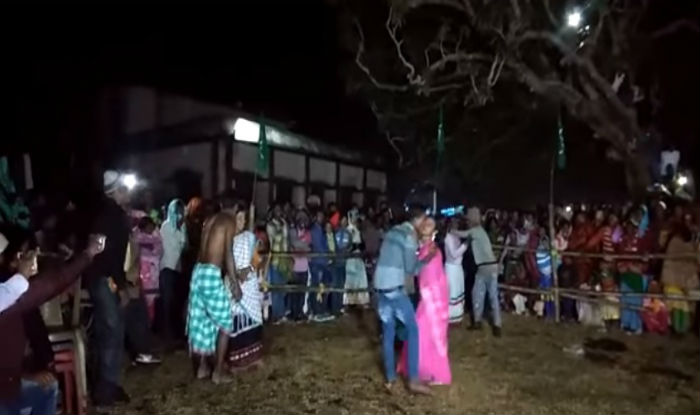 By organising kissing contest to 'check growing cases of divorces and differences between couples in the tribal community' in Dumaria village of Pakur district on Sunday,two Jharkhand Mukti Morcha MLAs-Simon Marandi and Stephen Marandi-have gained publicity and criticism as well.

JMM President Shibu Soren criticized them and the party issued a show cause to them.The reply of these JMM MLAs was awaited.

In any case,publicity was visible in the print and TV media.While kissing contest has figured in these media platforms across the country,these JMM MLAs were criticized by the ruling BJP as well.These JMM MLAs-Marandis- must be placed under suspension,says a senior BJP leader."The kissing in public is against tradition of the tribal community in Santhal Pargana.It is against the grace of womanhood",says the state BJP vice president Hemlal Murmu,himself a tribal from Santhal Pargana Division of the state in which falls Pakur.

"Under the guidance of Christian Missionary,the JMM wants to turn Santhal Pargana into  Jerusalem, a Middle Eastern city west of the Dead Sea,a place of pilgrimage and worship for Christians", says Murmu.

The kissing contest had a numbers of features.One,over 18-old tribal couples locked their lips in the presence of thousands of people in Dumaria,around 321 km from Ranchi,capital of Jharkhand.Two,it was held in the evening hours.

Three,while audience clapped and whistled,couples kissed each other.Four,most of them were young and were well dressed up.Four,a make shift green ground was the venue where two JMM MLAs who were Christians were seating in chairs with other invitees.