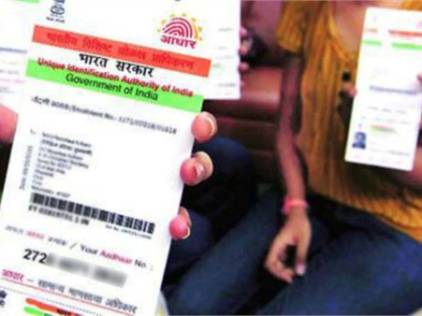 Centre has made it compulsory to link Aadhaar with a number of essentials like Income Tax returns,PAN,and much more.Notably,all mobile numbers that are not linked to Aadhaar will be deactivated after February 28,2018.

This has created a serious problem for leprosy patients, senior citizens and persons involved in manual work whose fingers were weared off  across the country.

The scene is no different in Jharkhand where Aadhaar card digitisation has become a problem for many leprosy patients,senior citizens and manual workers.Many of them them have lost their finger prints and thumb impressions.

With disfigured fingers and thumbs,they can hardly be eligible for verification under the present Aadhaar card verification system.Yet,telecom companies are repeatedly sending messages to them to get their numbers linked with Aadhaar.

This despite the fact that there is a notification from Finance ministry stating that senior citizens and sick& ailing people should not be asked to come to the stores/ telecom outlets, and the company should send their employees to get this process complete at their residence.

In fact,the mobile service providers, govt. functionaries and politicians do not understand the fact that as age advances the finger prints wear off, some times change and get blurred.

Similarly for the people involved in manual jobs, including Doms too face the same problem. The worst hit are the people suffering from leprosy that are hundreds in number.Since there is a precondition that to buy a sim card for the mobile phone Aadhaar card is needed,these senior citizens are facing huge problems."Why can't the government consider their problem and solve it",said Suman Sharma,a social activist.

Prime Minister Narendra Modi is claiming repeatedly that at airports entry too will soon be made through biometrics/thumb impression. This means that these affected people and senior citizens may be turned away from the Airports. “It seems the government neither understands the problem nor is serious to help them”, says Padam Shri Avadhash Kaushal, chair person RLEK who himself is an octogenarian.

Kaushal himself has Aadhaar card and since his finger print was blurring,he too faced the same problem.Is there any government authority listening?