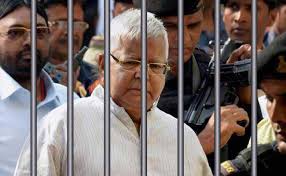 In another case in which he was convicted for 3.5 years of rigorous imprisonment,the Jharkhand High Court has agreed to hear his petition seeking bail in another fodder scam case on February 2.

This means that Yadav is bound to apply for bail in the third case afresh.When? No body knows.However,one implication of this is his party -RJD-may suffer from leadership crisis.There is a possibility of vertical split within the family and the RJD.

There were a total of 56 accused in the case, out of which six have been acquitted and punishment has been announced for the rest 50.

Two more cases remain to be disposed off by the CBI court in multi million rupee fodder scam case.So far he was convicted in three cases.In the third case cleared b y Justice Prasad,a huge sum of Rs 139.37 crore was fraudulently withdrawn by 114 accused during 1993-94.