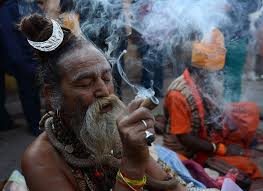 Gulping Bhang(an intoxicant) and or smoking Ganja(marijuana) has become a norm of sorts for many Hindus during the season of festivals.

The scene is no different  during the Mahashivratri festival.When the Hindus visit the Pahari Mandir in Ranchi,many of them were under the influence of either Bhang or Ganja.

Those people who use it is associated with Bhagwan  Shiva.On the day of the festival,they take take take a puff of a cigarette or a pipe containing marijuana buds passed around or sold by sadhus.It is seen as an homage to the Mahadev, the great god.

The government classified marijuana and bhang as illegal and banned their sale and consumption in 1973.Yet their use continued and the authorities have been tolerating their uses during Mahashivaratri.

"This, perhaps, has partly to do with the religious significance. And at the same time, the sheer number of people indulging in ganja and or bhang on the festival makes one think that maybe the law enforcement agencies cannot control their action",said a teacher.

"Giving them up would be unrealistic and as such the sensible thing is to leave the revelers to their own devices so long as they do not cause social disturbances."

On Tuesday the Shiva temple complex located on top of the Parari Mandir in Ranchi to celebrate the Mahashivrati festival,Come Tuesday, will be teeming with tens of hundreds of people.

Around 250 sadhus have already arrived from different parts of the state ,it is learnt."The temple management is aware of the cannabis smoking and selling that transpired on the temple premises during previous Mahashivaratris. This year, however, it plans to strictly monitor the use and sale of cannabis",said a police officer.

“We have already instructed the sadhus not to sell or offer marijuana to the visitors this year. There will be police deployment on the temple premises to ensure that,” Raghu Bir Ji,a cop.

The Ranchi Police is expected to be deployed in strength  to monitor the activities of the revelers visiting the Pahari Mandir and other Shiva temples on Mahashivaratri.

The police unit, which is located right at the main entrance to the Paahari Mandir temple area, is already on the case it seems.

Notably,some were caught in possession of high quantities.They were charged under the Narcotic Drugs (control) Act 1976."We have observed that nearly 50  youngsters smoking.We had warned and handed over to their parents.Some of them were admitted to rehabilitation centres at their parents’ requests.