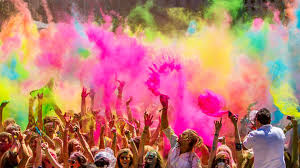 With face de coloured,men,women and children are moving around.After lighting of the bonfire,Holi celebrations are prevalent across the country.

No different in Ranchi and its adjoining areas in Jharkhand where an important annual festival is Holi.This is spring festival celebrated in the month of Phalgun or in the months of February/March according to the English calendar.

The festival is celebrated with great charm and vigor even in tribal areas of the state.As per the Hindu tradition, Holika dahan is much prevalent through out the country.The lighting of bonfire forms a special feature of this celebrations in Ranchi.

The state government offices were closed on Thursday and Friday.Governor and the CM have wished citizens 'Happy Holi.'The fun and frolic is also redefined in various forms in the festive celebrations.

After the colour is exchanged and people take bath cleaning their bodies,they  greet each other with colors and thus enhance the feeling of harmony due to which happiness prevails.

The tradition of playing Holi with mud is also extremely delightful.This time however,the state government has ordered the police to remain alert and maintain law and order during the two-day festival beginning on March 2,2018.