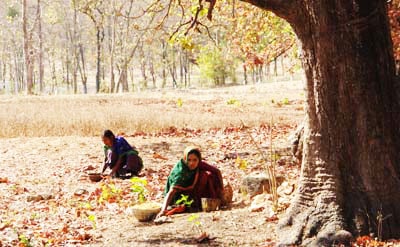 For the first time,Jharkhand Forest Department is working to prevent forest fires.To do so,it has set up fire-fighting teams.

These teams plan to work in coordination with the village ecology to keep a vigil on forest fire from spreading into the dense forest of the Dalma Wild Life Sanctury near Jamshedpur.

"This time,the fire fighting teams are being equipped with mechanised leaf blowers which will help in restricting the spread of ground fire",says Dalma Divisional Forest Officer Chandramauli Singh.

A group of tribals said in common that before the monsoon season begins,the they burn the dried up leaves to get ash which contains about 1.5 percent phosphorous and 7 percent potassium,two essential nutrients for paddy plant growth free of cost.Most of them were poor and indulged in burning of the dried up leaves of the summer season for gaining natural fertilizer.

"By stopping the fire,the forest officials will harm growth of paddy in farmers' fields",he cribbed.