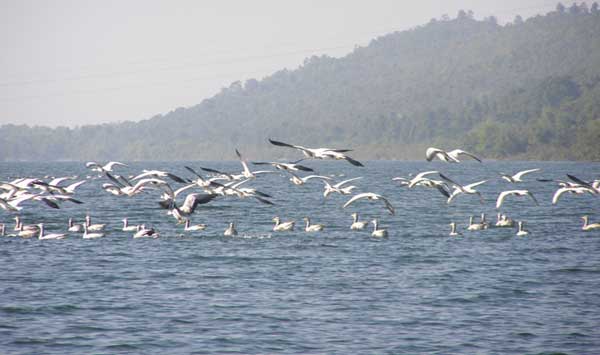 Believe it or not, bird population has declined in Tilaiya dam in Jharkhand's Koderma district, discloses the survey conducted by the state forest and Asian Waterbird Census.

The survey, conducted in 25 identified waterbodies across Jharkhand from January 10,2018 onwards, revealed that the number of birds had come down from 7,151 in 2016 to 3,131 this time.Reason?

Fishing through cage culture and sound pollution for the count drop and lesser visits by migratory birds.Though data of all 25 water bodies are yet to be compiled, the bird watchers estimated 15 percent decline in bird count compared to 2016 census.Notably, forest department did not conduct the census in 2017.

In 2016, birds of 11 rare species thought to be extinct were found during the survey of the water bodies.The same year the water bodies of Jharkhand managed to draw as many as 37,000 migratory birds belonging to 29 species.

As per the Asian Bird Survey 2015, the bird count around reservoirs and other water bodies, including 25 dams, in the state was 71,134.

“Loud music and other noises near water bodies scare away birds, due to which proper counting can’t take place. The bird survey in the state was completed in February,” the official said.

The survey said most birds visited the Massanjore Dam in Dumka, where the number of winged visitors was put at 9,564, followed by Chandil at 7,896 and Udhav at 7,823 birds. The fourth and fifth spots were claimed by Tilaiya and Patratu dams with 6,460 and 5,821 bird populations respectively.

“No proper arrangement is in place to prevent poaching of migratory birds at dams in Jharkhand. We will try to improve security near dams to preserve and protect the avian fauna, particularly migratory birds,” said the official.