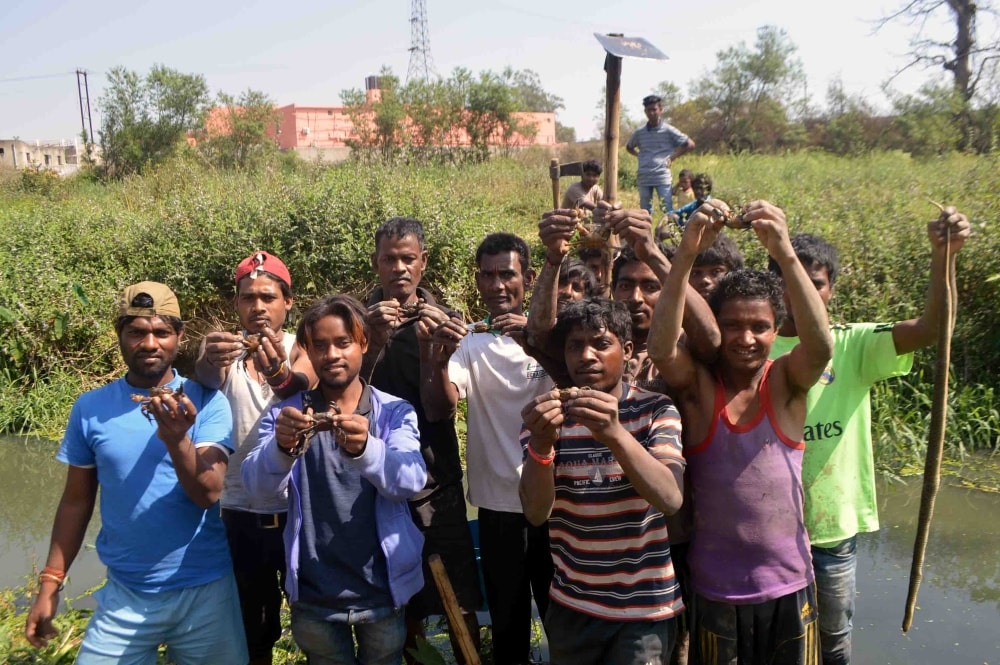 *Tribals show crabs caught by them to celebrate Sarhul.Pic by Ratan Lal

Tribals gathered in groups, sang and took out procession, each dancing along the main roads to celebrate their annual festival-Sarhul.

Prior to this they caught crabs,worshiped flowers of sal as their festival Sarhul is dedicated to “Dhartimata”(Mother Earth).

Held in the month of February-March, during the festival of flowers, they worship the Mother Nature.The tribes that celebrate Sarhul include Santhal, Oraon, Ho and Munda.. Those who celebrate Sarhul Puja practice agriculture. Sarhul literally means ‘Worship of Sal’.

This festival marks the beginning of the New Year and it is when the trees and other elements of nature are worshiped. The tribes that celebrate Sarhul believe that they can use new crop mainly paddy, leaves of the trees, flowers and fruits of the season only after this festival is celebrated.

Also, Sarhul can be redefined as the worship of Sita, the wife of Lord Rama as `Dhartimata`. As it is, during Sarhul festival the Sal trees in the forests sprout fresh new green foliage and flowers which are locally known as Shalony or Shalai, they are the symbols of friendship and brotherhood.

The Sal tree, which is believed as the abode of Goddess Sarna who protects the village from all kinds of natural calamities and disasters is worshipped during the festival. The entire village gathers near the SarnaSthal and witness the rituals.

Sarnadevi or ''Chala-pachodevi'', the protector of the Oaron tribe is worshipped. She lives in the wooden ''soop'' kept at an auspicious place (''chala-kutti'') in the pahan's house. Mascots of the festival the Sal flowers are offered to the village deities.

The sound of traditional drums like dhol, mandar, nagara and turhi reverberates in the air. The ''pahan'' distributes sacred ''achat'' and saal flowers to every villager and also performs ''phoolkhonsi'' i.e. putting the flowers on the roof of each house in the village.

There is another ritual in which the ''pahan'' puts few grains of rice on the hen's head. If the hen eats the grains when they drop on the ground, this is an assurance of good harvest in the days to come.This time, the prediction made by the Pahans(priests) is that the monsoon will be 'normal' this year.

All government offices and marketplaces were closed across Jharkhand where the sound of music and dance rocked throughout the day on Tuesday.Many male and female tribals were wearing new dress.Some of them were drunk too though no untoward incident was reported till late in the evening.