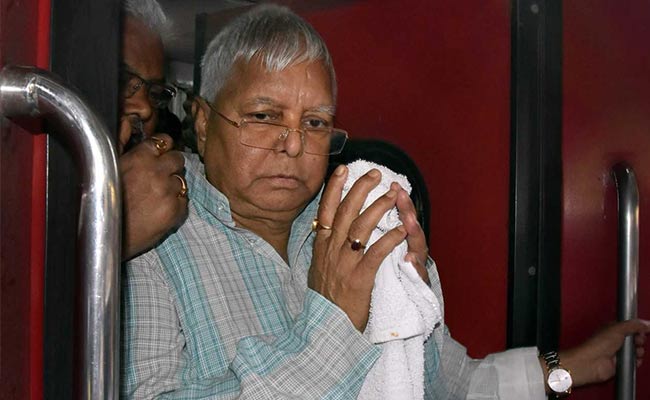 By rejecting RJD supremo Lalu Prasad Yadav's appeal to send him from Ranchi to Delhi by flight at his cost,the BJP government led by Chief Minister Raghubar Das has faced widespread criticism in public.

"It shows that this government has no sense of morality.It is a serious violation of human right.We condemn it',said Sudhakar Singh,a school teacher echoing the sentiments of many people in Bihar and Jharkhand.

Yadav,who has been serving a jail term in connection with the fodder scam, had waved at hi supporters at Ranchi station before leaving for New Delhi by First Class berth of the Rajdhani Express on Wednesday.

Although Lalu had requested the jail administration for a flight service and offered to foot his own bill,the state administration did not accept it.

As a result,amid heavy security both outside Rajendra Institute of Medical Sciences and at the Ranchi railway station where a battery -operated rickshaw was used to carry Lalu to the train.He had travelled with seven others.

When the RJD supremo landed at New Delhi railway station,he was welcomed and greeted by railway coolies there.

Later,he was admitted to the AIIMS in Delhi for specialised treatment.Yadav,who was serving his jail term in Ranchi, was referred to AIIMS by the Rajendra Institute of Medical Science (RIMS) in Ranchi.

"His condition is stable. He was brought in at noon. His sugar levels are a little bit high and he has some infection in the kidney," an AIIMS doctor said.

Earlier,the CBI court had allowed him to seek treatment at Delhi AIIMS.

Senior advocate Chittaranjan Sinha, who has been handling Prasad's fodder scam cases from the very beginning, said the 69-year-old leader is suffering from diabetes, high creatinine levels and blood pressure.

Today,JD(U) Rajya Sabha MP Harivansh also sounded critical of the state administration's decision not to allow him fly to Delhi."It is shocking",he said.