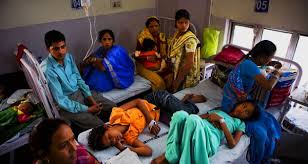 For the first time, the government has adopted pro-people scheme with Prime Minister Narendra Modi inaugurating the first healthcare and wellness centre.

The centre was set up under Aushman Bharat Yojna in Chhattisgarh's Bijapur district.

"The Ayushman Bharat scheme is not limited to simply providing a service, but also invokes public participation so that we can create a healthy, capable and content New India," PM Modi said after launching the scheme.

However, the move was subject to criticism."The scheme could have added strength to the health sector, had it made efforts to modernise its doctor-less and medicine- free centres prevalent today under the command of the state governments", said a senior doctor.

As it is, Ayushman Bharat Yojna, also known as the National Health Protection Scheme, has two main objectives -one, creating a network for health and wellness centres to deliver comprehensive primary healthcare close to the community.Two, provide insurance cover to 40 per cent of India's population, that is most deprived, for secondary and tertiary care, including for instance, hospitalisation costs.

The scheme has an ambitious goal: cover 10 crore poor and vulnerable families and provide a cover of Rs 5 lakh per family per year for secondary and tertiary care hospitalisation.