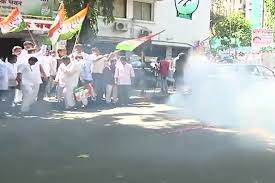 Evenas the results of Jharkhand Municipal Elections 2018 (Jharkhand Nagar Nikay Chunav 2018) are going to be made public on Friday,candidates and their supporters were busy to wrap up the Municipal polls taking place for the first time on political party basis in Jharkhand.

Officials say the counting of votes for 34 local bodies in the state are slated to begin at 8 am on April 20 and the results are set to be out by afternoon.Polls were held for five  Municipal Corporations,16 Municipal Councils and 13 Nagar Panchayats on Monday.

Both the ruling BJP and the opposition comprising JMM,Congress,JVM and so on are busy preparing to deploy their representatives to greet the victory.The band teams were booked and crackers bought.

This means that though the voter turn out of 65 percent across these municipal areas in the state,the roads and by-lanes in these towns and cities are going to witness Holi and Diwali after results were announced on April 20,2018.

This is bound to cause road jams making the citizens suffer from untold miseries while the police will look the other way,a sad feature of democracy.

Records state that nearly 22 lakh voters were eligible to cast their votes for 34 urban local bodies in Jharkhand. Meanwhile, by polls were also held at four local bodies – Jhumri Tilayya, Deoghar, Dhanbad and Bishrampur. According to Jharkhand State Election Commission, 278 candidates were in the fray for 34 Mayor and chairman seats,  320 for Deputy Mayor and Vice chairman, 122 for Mayoral and Presidential posts and 23 candidates for Deputy Mayor and Vice President posts.