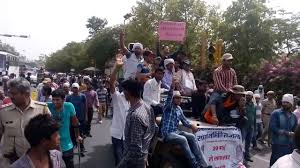 Ahead of by-polls on May 27, electioneering has picked up momentum in two Assembly constituencies in Jharkhand-Silli and Gomia.

In Silli, where the ruling BJP did not put up its candidate, the fight is between its ally All Jharkhand Students Union(AJSU) president Sudesh Mahto and the Jharkhand Mukti Morcha candidate Seema Devi.

The scene is different in Godda where a triangular contest has visible between AJSU's Lambodar Mahto, BJP's Madhav Lal Singh, and JMM's Babita Devi.

The candidates and their supporters were leaving no stone unturned to gain victory. As such, they were busy on campaign trails and moving from one door to another door and field braving the heat in the pick of summer.

Prominent among those who have addressed election rallies in Gomia were JMM Chief Shibu Soren and BJP leader and Chief Minister Raghubar Das. They had blamed each other and claimed to have worked to bring development in the area.

Both these parties were vocal. However, the fight was triangular between BJP's Madhav Lal Singh, AJSU's Lambodar Mahto, and JMM's Babita Devi.

In Silli, Sudesh Mahto who is ex-Deputy CM and a popular leader appeared to be locked in a direct fight with the JMM's Seema Devi.

Notably, the grand old party -the Congress does not figure in these two constituencies as it had not put up its candidate."We are supporting our ally JMM", said a senior Congress leader Subodh Kant Sahay.

The by-polls were due following the disqualification of two JMM MLAs-Amit Mahto(Silli) and Yogendra Prasad(Gomia) following imprisonment orders for two and three years to them respectively by district courts in criminal cases.