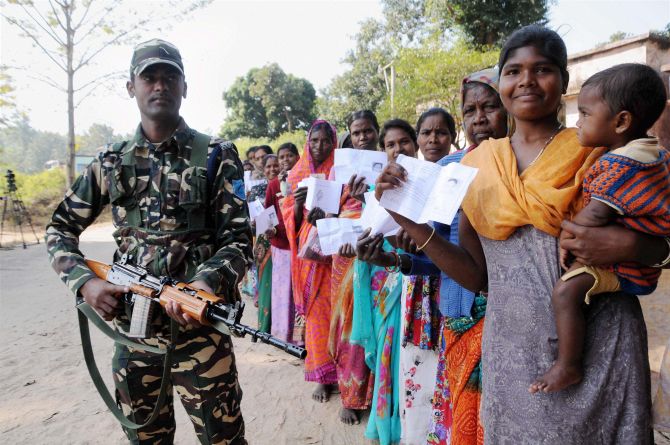 Gomia and Silli in Jharkhand are among five seats where Assembly by-polls are taking place. Other three Assembly seats are Maheshtala in West Bengal, Jokihat in Bihar and Ampati in Meghalaya.

Security has been tightened and administrative personnel are learned to be busy holding the by-polls in all these Assembly seats in eastern India including Gomia and Silli in Jharkhand.

Also, the by-election is being held in the lone Nagaland Lok Sabha seat.It was necessitated after the Nationalist Democratic Progressive Party (NDPP) leader Neiphiu Rio, now chief minister of Nagaland had resigned as a Lok Sabha MP early this year.

The battle of ballots is considered as a test of strength between the candidate of the Naga People's Front (NPF) supported by Congress and the nominee of the ruling People's Democratic Alliance (PDA).

More, the PDA, which has the NDPP and the BJP as it major constituents, has fielded former minister Tokheho Yepthomi in the seat. The Congress has extended support to NPF candidate C Apok Jamir.

The by-poll in Mahestala Assembly seat in West Bengal is witnessing a three-corner contest with the ruling Trinamool Congress, the BJP and the Left Front in the fray.

The TMC has fielded Dulal Das, husband of late party MLA Kasturi Das whose death has made the by-poll possible, while the BJP, which is trying to emerge as the main challenger to the TMC, has nominated Sujit Ghosh, former joint director of the CBI. The Left Front, on the other hand, has given a ticket to Prabhat Chowdhury, a local.

In Jharkhand's Gomia Assembly seat, though there is a total of 13 candidates, the main contest is between BJP's Madhavlal Singh, AJSU's Lambodar Mahto, and Jharkhand Mukti Morch as Babita Devi, wife of disqualified JMM MLA Yogendra Mahto.

In Silli, also in Jharkhand, of the total ten candidates, the main contest will be between the former deputy chief minister and AJSU president Sudesh Mahto and Seema Mahto, wife of disqualified MLA Amit Mahto of the JMM.

The by-poll in both Gomia and Silli Assembly seats were necessitated following the conviction of Yogendra Mahto (Gomia) and Amit Mahto (Silli). Both were elected on JMM tickets in the 2014 Assembly elections. Who will win? Nothing can be predicted as the contest in both these two Assembly seats is tough.So, wait for the results.