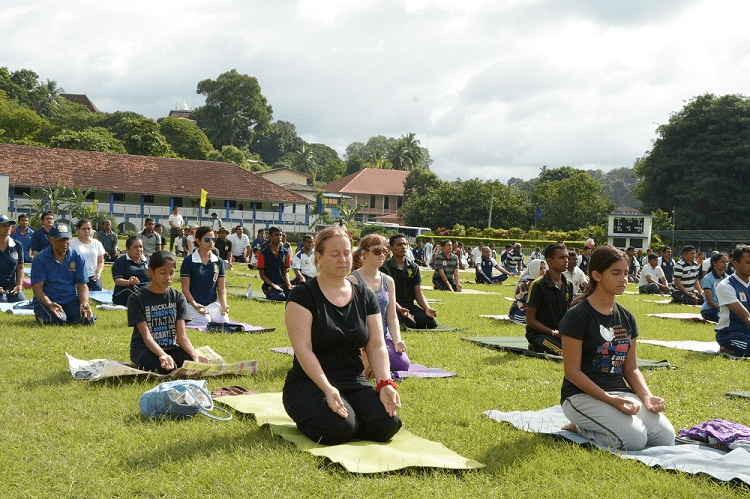 The fourth International Yoga Day will be observed by different organizations at various locations in Ranchi, Jamshedpur, Dhanbad and Bokaro on June 21.

The BJP government led by Chief Minister Raghubar Das is leaving no stone unturned to make the event historic.Das himself will perform Yoga among thousands of people

“Around 50,000 people are expected to participate in a mass yoga session organized by the state government, Art of Living (AOL) at Morahabadi Maidan Complex from 6.30am to 7.30am.

Governor Draupadi Murmu and other Ministers and senior officers are likely to participate in the event,” Already, training sessions have been going on during the past one month.

In fact, the AOL will hold yoga camps in all the 38 districts of the state. “Different asanas like ‘surya namaskar’, ‘savasana’, ‘kaya sthairyam’, ‘tadasana’ and ‘triyak tadasana’, among others, will be practised by experts,” Manoj said.

According to BJP spokesperson Pradeep Sinha among other BJP leaders will also attend yoga camps at different places on  Thursday.”

More, health-conscious citizens of Ranchi are also gearing up for Yoga Day. “I do yoga every day to stay fit and young. It gives me positive energy,”Sunita Kumari said,a school teacher.

Youths too are excited for the day. Ashok Nagar residents Ashok Kumar resident Ayushi Singh  and Parvati Kumari said, “My cousins and I are planning to go to the Pataliputra Sports Complex to learn some yoga asanas this Thursday.”