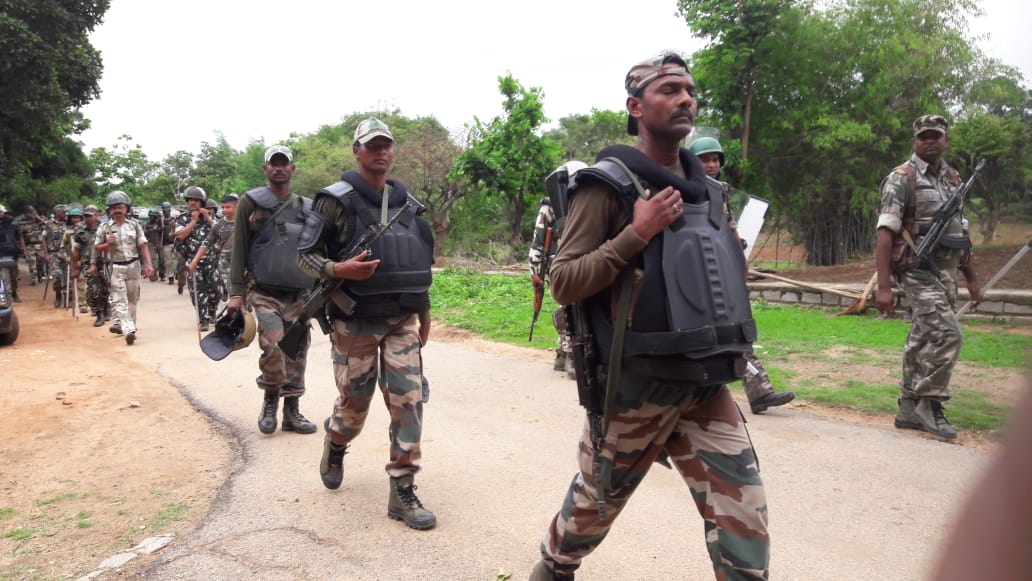 *file image showing policemen marching towards the site where the incident took place on Tuesday.

Shock and grief have engulfed Khunti, district in Jharkhand where legendary tribal hero-Birsa Munda battled against the British rule after three policemen were abducted by tribals in Jharkhand.

These cops who were security guards of BJP leader and ex Lok Sabha Deputy Speaker Kadia Munda,were abducted on Tuesday afternoon after the police started search operations in the villages of the Khunti area for the men who had raped five activists last week.

The abductors had looted their AK 47 and Insas rifles too.The police said initial investigations into the kidnapping suggest the involvement of supporters of "Pathalgarhi" - an anti-establishment, self-rule movement in parts of the state's tribal belt.

BJP lawmaker Karia Munda, at whose home the three policemen were posted as security personnel, said: "There is no doubt that they (the kidnappers) were from 'Pathalgadi' agitators. They had come to find someone. Their motive was to paralyse police administration to establish their (tribal) rule".

Munda sounds critical of the ruling regime led by his party's leader and Chief Minister Raghubar Das."I had apprised him of the scene after Pathalgadi agitation started.Had appropriate action been taken,their agitation would not have taken such a dangerous turn,"said Kadia Munda.

There has been widespread tension in the area since the police started raids to find the men involved in the rape, who are allegedly hiding in the villages.

On Tuesday, there was an hours-long face-off between the policemen and locals after the police came to investigate the kidnapping. The police said its senior officials and nearly 300 personnel, who were involved in search operations in the nearby areas, had to spend the night there, reasoning with the villagers so they go home peacefully.

Last week, a group of six men had abducted 11 activists from Khunti - an area around 100 km from state capital Ranchi -- on Tuesday. The activists, whose ranks included five women, had gone to the area to conduct an awareness campaign on human trafficking, one of the biggest threats to women in the area. The activists work for Asha Kiran, a non-profit supported by a local Christian missionary group.

The 20-35-year-old men had gang-raped the women for four hours, violently treated them with a pistol and a branch of a tree and forced them to drink urine, claimed one of the victims.

Worse,the criminals had made videos of the assaults on their cellphone with an aim to blackmail the rape victims. Senior police officer RK Mallick said it was "not a crime of passion... it was a conspiracy to teach them a lesson".