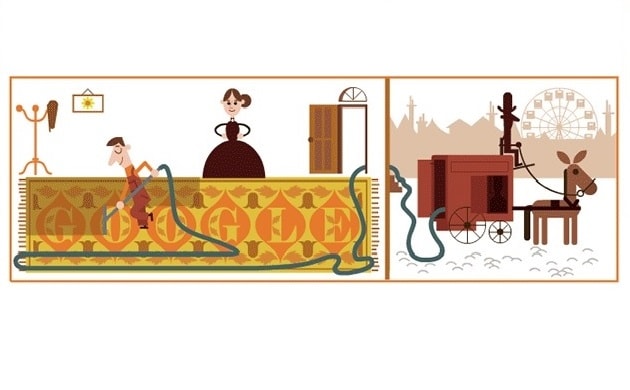 Google is celebrating the 147th birth anniversary of Hubert Cecil Booth (4 July 1871 – 14 January 1955), the famous engineer who is credited of inventing powered vacuum cleaner with a Doodle on July 4.

Booth was born in Gloucester, England. He obtained his Civil Engineering degree from the City and Guilds Institute, London.

Booth first got the inspiration of designing his cleaning machine when in 1901 he attended a demonstration of an American cleaning machine by its inventor. The machine blew or brushed the dirt away, instead of sucking it up. While watching the demonstration he thought "....if the system could be reversed, and a filter inserted between the suction apparatus and the outside air, whereby the dust would be retained in a receptacle,the real solution of
the hygienic removal of dust would be obtained."

Booth's very first vacuum machine was a huge machine. It was petrol-powered and hauled by horse-drawn carriage. He called his new invention "Puffing Billy". He followed this up with an electric-powered model.

Booth's machine was extremely bulky and had to be pulled around by horses and parked outside the house to be cleaned. Once when cleaning the royal mint, upon leaving he was arrested as his machine had collected a massive amount of silver dust from the coins and he had forgotten to empty it. He was however quickly released.

In order to sell vacuum cleaning services, he founded the company 'Goblin' which is now known as 'BVC'.