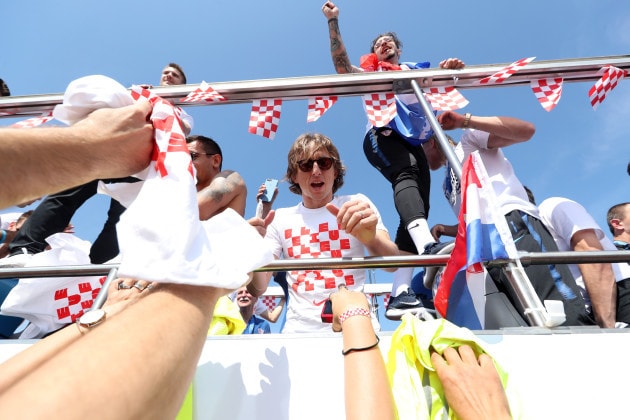 Contrast is too apparent to be missed.

In India, many guys had burnt the effigy of MS Dhoni in his hometown Ranchi after the Team India lost cricket match in England some years ago.In Pakistan, the people took out rallies and yelled slogans against their cricket players who had lost one international cricket match in 2015.

All of them ought to take a lesson from the people of Croatia. Though their team lost the final match against France in the FIFA, they greeted the team players.

More than  250,000 people had come out in central Zagreb and many more along the route. The players’ bus travelled for hours, often stopping when it was blocked by the crowds.

“Thank you Croatia, thank you Zagreb!” captain Luka Modric, who won the Golden Ball after being voted the best player of the World Cup, told the crowd after the team finally arrived at the central square in the evening.

Midfielder Ivan Rakitic added, “There are no words to describe how we feel now!”

The players lined up to sing the national anthem with the packed square thundering in joy. Right-wing nationalist singer Marko Perkovic Thompson joined in toward the end, singing a couple of songs.

Fans honking car horns, waving and shouting “Bravo! Bravo!” welcomed the bus as it slowly left the airport. The inscription at the front read: “Fiery heart, the pride of Croatia!” in reference to the name “The Fiery” as the team is dubbed at home.

"When the people show unity and cheer joyfully over defeat,they inspire the players who lost. Now, they have proved that they had set a milestone for the victory in the next FIFA",says a cricket fan in Ranchi who has not pardoned the men who had set afire the effigy of MS Dhoni.

"We must learn from the people of the small country Croatia who were big at heart",he added.