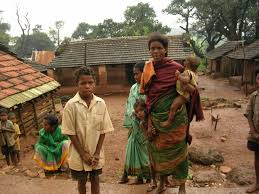 His wife,Shanti Devi (35) and his children live inside a hut where aluminum utensils were empty. There was no box, no almirah and no cash.Her eyes were dry. And in response to a repeated question- why did he die so young-she uttered:"We did not have money to buy food and medicine."

At Nawadih village of Mandu block in Ramgarh district of Jharkhand, many eyes were numb. Rajendra Birhor, belonging to the primitive Birhor tribe, died on Wednesday. As usual, after last rites were performed and his death due to 'hunger' was published in local newspapers, officials turned up.

Apart from Rs 10,000, she was given Though all these officials admit this Birhor family lacked health insurance and ration card,none of them attribute the cause of his death to 'hunger.'

Even Shanti Devi admits that her husband was suffering from jaundice and that he-she did not have money to buy food and medicines prescribed by doctors.

Since her family did not have a ration card, they were not getting subsidized food grain under the public distribution scheme of the state government, Devi said.

A father of six children, Birhor was the only earning member of his family. He was recently admitted to the Rajendra Institute of Medical Sciences but was discharged following treatment.