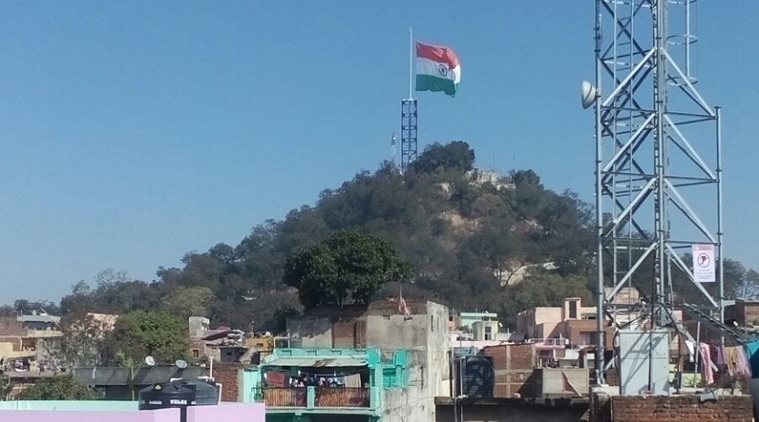 Das who visited the Pahari Mandir site together with Deputy Commissioner Mahimapat Ray on Friday directed him to take out the tallest pole and put it at Morahabadi Maidan in the state capital. Mahimapat is learned to be busy following the CM's order.

Historical records indicate that Pahari Mandir having a temple of Lord Shiva was used by the British to hang freedom fighters.After the BJP government led by the CM Das was in power, the sturdy 293-feet flagpole was procured from Walmart’s India unit in Pune.

As a mark of respect to those freedom fighters, the national flag is traditionally raised at the temple every Republic Day and Independence Day.Parikar who was accompanied by Das had hoisted the 60-kg flag with dimensions of 66-feet-by-99-feet.

The flagpole costing more than a couple of crores rupees stood at 293-feet (earlier highest in Faridabad was 250-feet) and is at 493-feet from the ground level. The flag was sent up with the help of a motorised mechanism, amid the presence of a large number of school students and supporters.

The aim behind installing the largest flag on top of the Mahari Mandir by the Ranchi district administration headed by Officer-on-Special-Duty (Pahari Mandir Vikas Samiti), Amit Kumar, who was then the Sub-Divisional Officer (Ranchi), was rooted in tradition. “We were planning for the renovation of the Mandir. Since the national flag is traditionally hoisted on top of this Mandir on every Independence Day and Republic Day, we thought why not make it a permanent and a grand feature",said Kumar.

However, the entire project spoiled the rocks of the hill on top of which the Mandir was located and the 'tallest pole for the largest national flag was unfurled by Parikar.The sand and rocks started falling causing threat of land slide.This happened mainly because the engineers who installed the tallest high-quality flagpole had raised anchors and a platform by removing rocks and soil.This damaged the natural hill and its rocks threatening the Shiva Mandir and the possibility of landslide.

Aware of it in this season of Shravan month when thousands of Shiva devotees climb up the hill to offer a prayer before Lord Shiva,at Pahari Mandir,the CM Das preferred to take action.  .

Legend has it that more than 250 freedom fighters were hanged from Pahari Mandir by the British, as a result of which it also came to be known as “Phansi Tinguri” (roughly translated as the hanging hill).