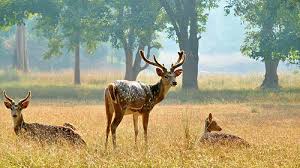 An investigation by the forest department officials indicates that a wild deer was shot dead by a gang of poachers in Hazaribagh.

The investigation started after the police and forest officials recovered a dead deer near Mahudi forest in Barkagaon on August 29 evening. Officials said postmortem had confirmed that the wild deer was shot dead by poachers."It is a clear case of poaching", said a senior forest department officer.

"It seems that after a poacher opened fire, the deer ran towards the village, located inside forest area. Soon, the poacher shot the deer but failed to catch it. As a result, it started running towards a village and died", says  Forest officer Tarun Kumar Singh who reached Mahudi forest and started the probe.

"We are trying to nab the killer poacher. The culprits will not be spared", he said.Record shows that poaching of wild deer has been going on since long in Mahudi forest-known for the presence of a large number of deer.

"The problem is villagers in absence of security have not been able to help us contain the crime", said another forest staff.'The deers are killed for consumption of its meat and sale of its skin in black market.

While postmortem report has confirmed the death of this deer due to 'bullet injury", local villagers said it was not right that wild animals getting killed by poachers. They demanded immediate check on this practice.