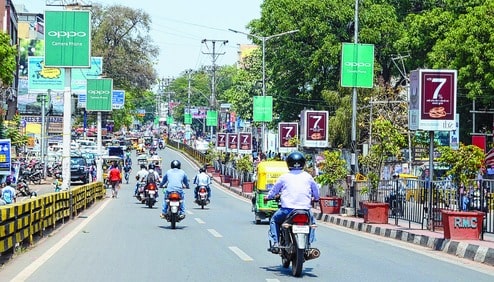 'Representational picture shows normal traffic on Over bridge in Ranchi.

These activities showed that the Bharat Bandh called by the Congress party and its allies across India has flopped in Ranchi and adjoining areas of Jharkhand on Monday.The bandh was called to protest against the skyrocketing prices of petrol and diesel.

After the bandh was advertised by these opposition parties,processions were taken out by their workers.As a precautionary move,management of private schools took the decision to keep them shut.Private buses did not ply on highways,causing untold miseries to commuters.

While the ruling BJP described the bandh as a 'flop',Congress chief Rahul Gandhi blamed Prime Minister Narendra Modi saying he has 'failed to deliver' and remained silent over the rising fuel prices."Worse is,the fall in the value of Rupee",he said in New Delhi on Monday.

Opposition parties such as JMM, SP,BSP,TMC,DMK and RJD had verbally backed the Bharat Bandh call.Five Left Front parties had given a separate call for bandh over the hike in fuel prices,the problem of farmers,and unemployment issues.

The failure of the bandh shows that many people were not inclined to accept the opposition parties' protest against the Narendra Modi government accusing it for the fuel price hike and fall in value of Rupee in the world market."The Modi government has nothing to do with these issues",said a paan wallah who was a graduate, echoing the sentiments of many residents.