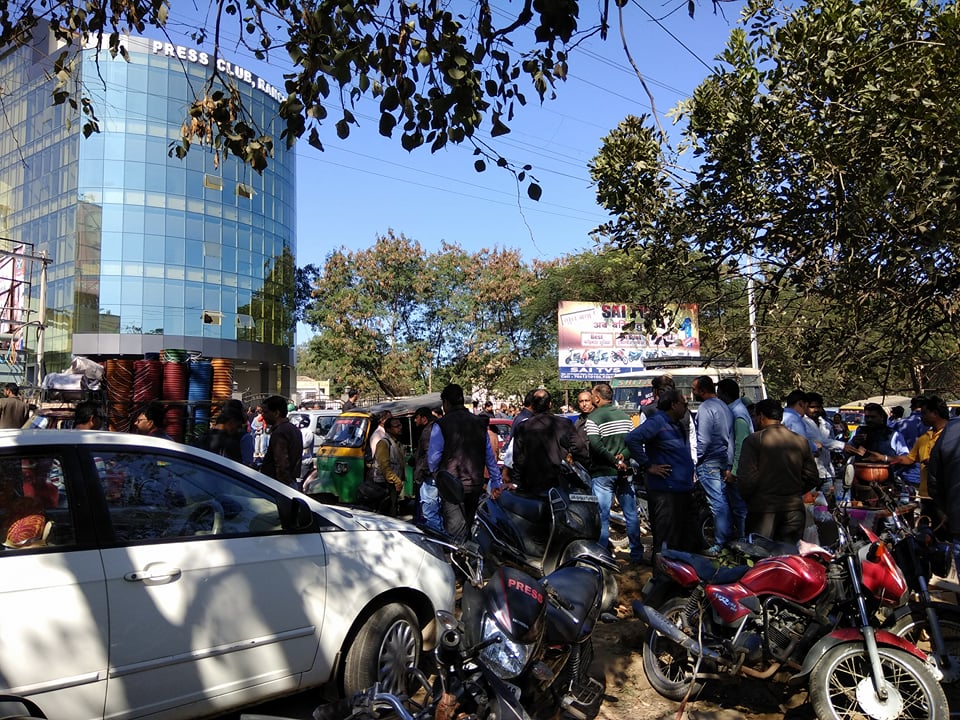 A first of its kind press conference ‘for children and by children’ was organized in the Ranchi Press Club today to the celebration of the child rights week (14 – 20 November).

During the press conference Child Reporter Surabhi, 14 years from the Government School Pirra in Kanke said, “We children have the right to survival, development, protection and participation as per the United Nations Convention on the Rights of the Child (UNCRC). We celebrate World Children’s Day on 20 November which is when this landmark Convention was adopted in the year 1989. As media persons, I would urge you to provide spaces and platforms to the voices, thoughts, ideas and opinions of children like us.

Child Reporter Abhinandan Kumar, 14 years from the Government School Bodya in Kanke said, “I am very excited that we children will celebrate World Children’s day by participating in the Jharkhand Film Festival which is being organized by UNICEF, Prabhat Khabar and the Central University of Jharkhand. During the Film Festival, we will watch some award-winning children’s films and interact with the filmmakers. During the Festival, the winners of the All India Short Film Competition organized as part of the Film festival will be awarded and their films screened. I am proud to report that my fellow Child Reporters Surabhi and Nikhil were a part of the jury that selected the winners. I take this opportunity to invite all of you to the Festival to join us in celebrating our day, the World Children’s Day.”

Child Reporter Shubham Kumar, 12 years from the Government School Pirra said, “We Child Reporters with UNICEF and Alok Bharti support have launched our own 10 episode YouTube series called Adhikaron ki Baat Bal Patrakaron kay Saath which is featured on the Radio City channel with 444,000 subscribers. During the programme we interview eminent personalities from the state. So far we have interviewed Dr Madhulika Jonathan, Chief of UNICEF Jharkhand; Mr Rai Mahimapat Ray, Deputy Commissioner of Ranchi; Mr Anish Gupta, Senior Superintendent of Police, Ranchi; & Mr Kunal Sarangi, Member of the Jharkhand Legislative Assembly. I urge you to watch and share our videos as much as possible.”

Dr Madhulika Jonathan, Chief of UNICEF Jharkhand said, “20 November 2018 is the UN’s Universal Children’s Day. A day when the most widely ratified human rights treaty in history, the Convention on the Rights of the Child (CRC), was adopted. World Children’s Day is an annual global moment ‘for children, by children’. It’s a day of action - to advocate and raise awareness on the most pressing issues facing children. In 2018, the world will come together on World Children’s Day to reach 1 billion people to play their part in building a world where every child is in school, safe from harm and can fulfill their potential. We hope you’ll join us to make the most of November 20th and to put the spotlight on children. Because if we get this right, every day will be World Children’s Day.”

Dr Dev Vrat Singh, Dean and Head of Department, Centre for Mass Communications, Central University of Jharkhand said, “We are pleased to collaborate with UNICEF and Prabhat Khabar to organize the Jharkhand Children’s Film Festival in Ranchi from 19 to 20 November 2018 in the CUJ campus in Brambe. This festival is also supported by the Children’s Film Society of India. During the film festival, children and mass communication students from various colleges/universities will be able to interact with eminent filmmakers such as national awardee Ms Batul Mukhtiar; Prof Shilpa Ranade who is an acclaimed animator and filmmaker; and Meghnathji among others. Some ofBest Children’s Film at the 61st National Film Award in 2014); Prof. Shilpa Ranade’s Goopi Gawaiya Bagha Bajaiya (winner of the18th International Children’s Film festival award; & Mr Amol Gupte’s critically acclaimed Stanley ka Dubba among others. During the Film Festival panel discussion on the ‘Representation and participation of children in the media’ is planned besides workshops for mass communication students and children from government schools.”