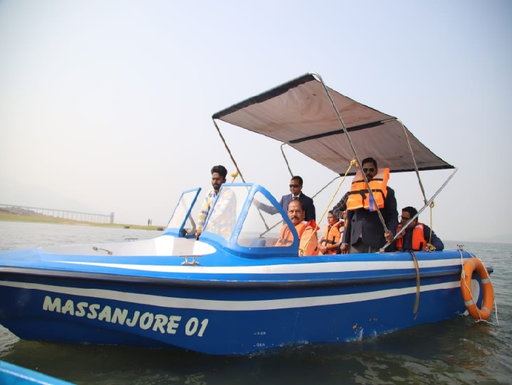 Jharkhand Chief Minister Raghubar Das today took a boat ride on Massanjore dam. Guarded by his security men, he moved around enjoying the beauty of nature.

Also, Das inaugurated a tourist complex comprising a restaurant and a spot to view the nature's gift-hills and dam at Massanjore. Tourist complex was built to attract tourists, said the CM.

"We will hold a meeting of the Cabinet here", the CM announced at the site.

As it is, Massanjore has a hydropower generating dam over the Mayurakshi River located at Massanjore near Dumka in the state of Jharkhand, India.

Record shows this dam, across the river Mayurakshi, was commissioned in 1955. It was formally inaugurated by Lester B. Pearson, Foreign Minister of Canada.

Alongside, there are canals on the sides of the dam which irrigates the fields. Though this dam is in Jharkhand, the lions share of its benefits goes to W.Bengal as per the agreement between Bengal and Bihar (Jharkhand was a part of undivided Bihar then).

The spring is a good time to visit here though the new years day sees a big crowd for picnic and recreation. For stay, there is a govt IB of the irrigation department for which prior booking is necessary at Dumka office. This IB came into limelight when the then Home Minister of India L.K Adwaniji was kept in Massanjore after his arrest during his famous "Rathyatra" in 1990 at Samastipur, Bihar. Dumka is also reachable by train via Jasidih or by bus from all major towns.

Now, Das, who appears to have been upset over West Bengal CM Mamata Banerjee's statement that Massanjore 'belongs' to her state, has responded by setting up Jharkhand government's tourist complex.