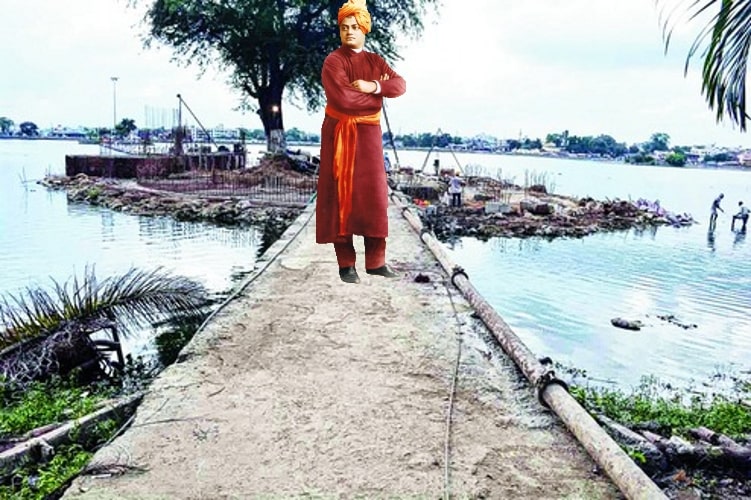 *Image for representational purpose only.Site showing where the statue of Swami Vivekananda is to come up.

Come New Year 2019 and the tallest statue of India’s greatest visionaries, scholar and social reformist, Swami Vivekananda will be installed at Ranchi Lake.

The move is part of a long pending project of installation of Vivekanand’s statue at an islet of Ranchi Lake. Now, it has gained impetus after two-year of the approval of this mega venture. The installation work of sculpture is expected to get over soon.

The statue-the 33 feet figurine-is expected to be unveiled by Chief Minister Raghubar Das on January 12 – the birth anniversary of Swami Vivekananda. The statue installation function being organised by the Raghubar Das government will mark the National Youths’ Day celebration in the state capital.

www.jharkhandstatenews.com has learnt that well-known artist and a recipient of Padma Bhushan Ram V Sutar has designed the 33 feet bronze statue. In all, the budget for designing the bronze figurine including other major restoration activities is estimated around Rs. 15.5 crore.

The construction work of pillars for linking bridges is approximately complete, while as per the instructions of the Department of Urban Development, Housing and Planning, the restoration task of the pond on the line of Mumbai’s Marine Drive has been approved.

The real estate company – Shapoorji Pallonji Group has assured to complete the civil construction work on or before January 2019. Around 142 pillars have been built inside the pond.

Earlier, in January 2016, CM Raghubar Das had laid the Foundation stone of this project with a vision to boost tourism, later in January 2017. The PSU- MECON had taken up the civil work there especially to assess the geophysical aspects of the site.

Das government claims that the 33 feet carving of Swami Vivekananda is first of its kind in India and is expected to set a benchmark by grabbing coveted honour of the highest statue of Vivekananda set up in Jharkhand after the 22 feet Swami’s figurine at Nagpur decked up at a park, a year ago.