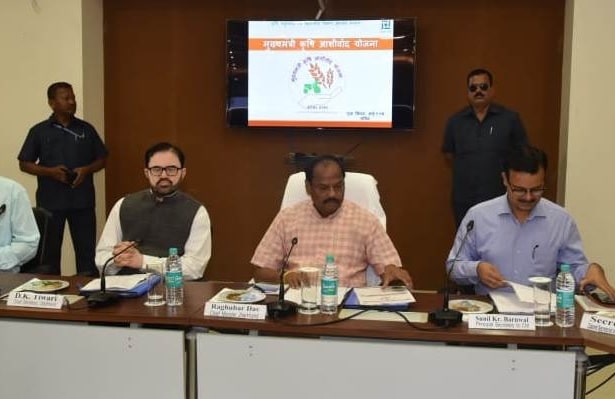 Chief Minister Raghubar Das today reviewed the development scheme of Central and State government with DC of all districts in project building. In the meeting, he said that there will be no holiday for the next four month. Team Jharkhand will focus on development work with special focus on farmers.

The Chief Minister said that the work of mutation of the partition of inheritance of agricultural land etc. should be completed by running a campaign. Districts will be given monthly mutation target in the next three days. DC should hold a meeting with Panchayat mukhiya and Panchayat representatives on 31st May and instruct them about the work to be completed in four months which will include street light, paver block road, solar system and drinking water facility.

The Chief Minister said that those who don't have a toilet facility at home can directly apply to DC. With keeping such application to priority, work of construction of left out toilets should complete by 30th June.

The Chief Minister said that the target of Prime Minister Housing Scheme (Rural and Urban) should complete in the next four months. DC should monitor the construction and allocation of houses. He said that patient of leprosy must be given housing facility.

The Chief Minister said that 29 lakh families of the state have been given gas connection under Ujjwala Scheme. More 14 lakh families will be covered under the scheme in four months.

The Chief Minister said that the work of Golden Card under Ayushman Bharat Scheme should be completed by running the campaign. Quality hospital of all districts should be made part of Ayushman Bharat Scheme. 57 lakh families of that state are getting the benefit of the scheme. 150493 people have taken advantage of the scheme which costed Rs 118 Crore.

The Chief Minister said that DC should ensure that Manjhi, Rajgnait, Dakua, Paranik, Jogmanjhi, Kudam, Nayaki, Godait, Mul, Raiyat, Padha Raja, Gram Sabha Pradhhan and Tavedar are getting honorarium. At the same time ensure payment of old age, widow and divyang pension. Integrate SMS with it so the beneficiary can get information on time.

The Chief Minister said that electrification work should be done in every school, anganbadi kendra, health centre by the end of June.

In the meeting, Chief Secretary Dr. DK Tiwari said that all the officers for the next four months should focus on development work. In the work of mutation and the Chief Minister Krishi Ashirvad Yojna, the district which will be left behind, it will be enrolled in the ACR of the Deputy Commissioners. The doctors of Government Hospital who show ignorance towards Ayushman Bharta will also have an adverse entry in their ACR. The Chief Secretary said that monitor the response time in electricity-related complaints so that it can be ascertained in how much time the complaints of the common man are being resolved.

Principal Secretary to Chief Minister Dr. Sunil Kumar Barnwal said that use LED van for 12 hours in rural areas. All DC should do a monthly press conference on scheduled time. Communicate with the public for 2 hours each week through teleconferencing.